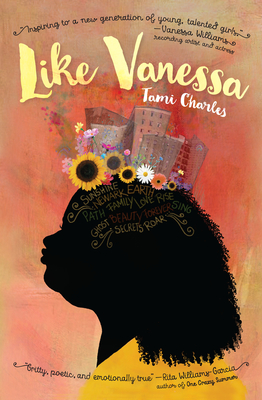 “All I can say is thank goodness the '80s are back in fashion, because this gem of a book is best read sitting in front of a TV tray in a recliner. Inspired by Vanessa Williams' 1983 Miss America win, a headstrong and pushy teacher, and a supportive and scheming grandfather, Vanessa Martin braves the small-town pageant circuit, the potential disappointment of her father, and the challenge of being dark skinned. Vanessa touches the dreamer spirit in all of us, and I cheered her on right through to the end.”
— Kim Bissell, Broadway Books, Portland, OR
View the List

Middle graders will laugh and cry with thirteen-year-old Vanessa Martin as she tries to be like Vanessa Williams, the first black Miss America.

In this semi-autobiographical debut novel set in 1983, Vanessa Martin's real-life reality of living with family in public housing in Newark, New Jersey is a far cry from the glamorous Miss America stage. She struggles with a mother she barely remembers, a grandfather dealing with addiction and her own battle with self-confidence. But when a new teacher at school coordinates a beauty pageant and convinces Vanessa to enter, Vanessa's view of her own world begins to change. Vanessa discovers that her own self-worth is more than the scores of her talent performance and her interview answers, and that she doesn't need a crown to be comfortable in her own skin and see her own true beauty.

"It's such an honor to be the focal point of this wonderful book! Without a doubt, it will be inspiring to a new generation of young, talented girls well on their way to promising careers."   --Vanessa Williams, Multi-Platinum Recording Artist, New York Times Best-Selling Author, Fashion Designer and star of Television, Film and the Broadway Stage

"Like Vanessa has it all and then some!  Gritty, poetic, emotionally true, Tami Charles wrings out every hope, every stumble and every triumph of a girl on an uneasy road to possessing  her self, her strength and her own beauty. An unforgettable debut." --Rita Williams-Garcia, author of One Crazy Summer and P.S. Be Eleven

♦ "This debut is a treasure: a gift to every middle school girl who ever felt unpretty, unloved, and trapped by her circumstances."— Kirkus Reviews STARRED REVIEW

♦ "Charles evades the clichés and imbues Vanessa with an inner life that's so real and personal it's hard to deny the charm, heartbreak, and triumph of her story. . . . Superb."— Booklist STARRED REVIEW

♦ "Like Vanessa is an emotionally potent, engaging young adult story with a heroine whom it is impossible not to root for. The life lessons that Nessy learns are relevant and worthwhile for everyone."— Foreword Reviews STARRED REVIEW

♦ In pursuit of her dreams, Vanessa becomes an unlikely contestant in her middle school's first-ever pageant. African-American eighth-grader Vanessa Martin is glued to the TV when Vanessa Williams is crowned the first black Miss America in 1983. Inspired, Vanessa imagines her own dreams coming true. Maybe she can rise above her painful family problems and dissatisfaction with her dark skin. Maybe she can escape her gang- and drug-plagued neighborhood in Newark, New Jersey. But when the new music teacher, Mrs. Walton, who is white, encourages Vanessa to audition for the school's first-ever pageant, she declines. She has an extraordinary singing voice but lacks the confidence to compete. When Mrs. Walton, Vanessa's grandpa Pop Pop, and her cousin TJ join forces to get her to try out, she must face her fears—and the neighborhood mean girl—to have a shot at realizing her dreams. Vanessa's compelling story unfolds through a combination of first-person narrative, diary entries, and well-crafted poems that perfectly capture the teen voice and perspective. From the first page, readers are drawn into Vanessa's world, a place of poverty, abandonment, and secrets—and abiding love and care. The soundscape of early rap music helps bring the '80s to life and amplifies Vanessa's concerns about racism, friendship, family, and her future. Readers of all ages and backgrounds will cheer Vanessa on and see themselves in her story. This debut is a treasure: a gift to every middle school girl who ever felt unpretty, unloved, and trapped by her circumstances.
—Kirkus Reviews, STARRED REVIEW

♦ Vanessa Williams' 1983 win as the first black Miss America doesn't make the crown feel much closer to 13-year-old Vanessa Martin. Being raised in rundown Newark, New Jersey, young Vanessa feels too unpretty to even consider entering her school's beauty pageant, despite her amazing singing voice. Only at the urging of her new music teacher who happens to be in charge of the pageant, does Vanessa finally agree to participate, facing many challenges in the process. There is something retro in the execution and sincerity of Charles' semi-autobiographical debut novel. With its 80's "inner-city" setting and young black protagonist, guided to a better sense of self by a do-gooder white teacher, the story only needs to seat its characters backwards on school chairs to check all this genre's boxes. However, Charles evades the clichés and imbues Vanessa with an inner life that's so real and so personal it's hard to deny the charm, heartbreak, and triumph of her story. Additionally, the protagonist has a fractured and flawed, but loving, family at her back, which acts as a bulwark against her insecurities and drives the narrative to its hopeful, graceful conclusion. Best of all, is that with some support Vanessa ultimately finds strength in herself and goes on to be the greatest architect of her dreams. Superb.
—Booklist, STARRED REVIEW


♦ From the very first page, Like Vanessa conveys the hopes and fears of a girl who wishes for a different life. Nessy Martin is fourteen years old and living in Newark with her alcoholic grandfather, her mostly absent father, and her older cousin. Her mother left when she was just four years old, and Nessy has never understood why. The book takes place in the 1980s, just as Vanessa Williams becomes the first black woman to be crowned Miss America. Nessy dreams of being crowned herself, hoping that she can somehow win her mother’s approval. Though it scares her, she is convinced to enter a beauty pageant at her middle school, and in the process of preparing for the competition, she learns a great deal about herself and about the meaning of true beauty. Nessy’s descriptions of the local gang, the bodegas, and the music she hears drifting into her window at night bring her urban setting to life. Her understandings of her family members—a grandfather trying to forget, a cousin struggling with the safety of his differences—paint vivid portraits. Nessy’s desires and dreams of wealth and glamour are relatable, as is her lack of self-esteem. As, for the first time, her friends and family help her see the strong, talented, and beautiful young woman that she is, young adult audiences may be helped to similarly embrace how they, too, are worthwhile. Like Vanessa is an emotionally potent, engaging young adult story with a heroine whom it is impossible not to root for. The life lessons that Nessy learns are relevant and worthwhile for everyone.
—Foreword Reviews, STARRED REVIEW


Watching TV in the Newark, N.J., apartment she shares with her loving grandfather, big-hearted gay cousin, and reclusive father, Vanessa Martin feels "the tiniest piece of hope" as Vanessa Williams is crowned Miss America in 1983. Though Williams is lighter-skinned than she, the 13-year-old reasons that the pageant winner's victory "means that one day girls like me—the blackest of black—could be seen as pretty too." Throughout the course of Charles's sinuous novel, Vanessa reveals other deep-seated hopes: that she finds her mother, who disappeared years before, and that her father, who is "locked away in his chamber of inner demons," will also reemerge. When her insightful and supportive teacher encourages Vanessa, an honors student who sings magnificently, to enter the school pageant, she agrees, despite her self-doubt and classmates' jeers. Vanessa's honest, at times sardonic narrative—supplemented by poems and journal entries—tracks her burgeoning maturity as she discovers the essence of authentic friendship, comes to terms with family secrets, and gains the confidence to stay true to her vision. Loosely autobiographical, Charles's debut novel dexterously interlaces pathos and humor and introduces a refreshing new voice.
—Publisher's Weekly


When Vanessa Williams is crowned the first black Miss America in 1983, her namesake Vanessa Martin is ecstatic. Despite considering herself “too dark” and “too fat” to win a contest, the Newark eighth-grader has always dreams of following in the footsteps of her own beauty-contestant mother, who took off when she was a baby, leaving the family “broken.” (“That was when everything changed…Pop Pop turned to booze, Daddy’s spirit up and died, and we moved to the projects.”) Vanessa gets her chance when her music teacher announces the school’s first-ever beauty pageant. Her emotionally distant father notwithstanding, Vanessa, a talented singer, receives encouragement to participate form her cousin TJ and grandfather Pop Pop. The process proves grueling, as Vanessa struggles to maintain friendships, develop self-confidence, and conform her family’s metaphorical demons. Sprinkled with poetry and motivational phrases from her entries in “Darlene,” as Vanessa names the diary she receives from Pop Pop every year, Charles’s debut novel will appeal to young readers, who will appreciate and empathize with the protagonist’s journey to earn the crown. Vanessa’s failures and triumphs lead both her and readers to realize the meaning of true beauty.
—The Horn Book

Tami Charles is a former teacher and full-time author of picture books, middle grade and young adult novels, and nonfiction. As a teacher, she made it her mission to introduce her students to all types of literature, but especially diverse books. While it was refreshing to see a better selection than what she was accustomed to as a child, Tami felt there weren’t nearly as many diverse books as she’d hoped for. It was then that she decided to reignite her passion for writing. Tami is the author of the middle grade novel Like Vanessa (2018) and the picture book Freedom Soup (Candlewick Press, 2019).
Loading...
or
Not Currently Available for Direct Purchase