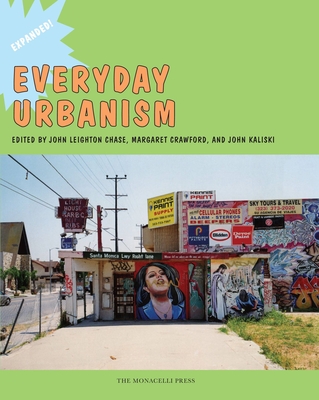 First published in 1999, Everyday Urbanism has become a classic in the discussion of cities and real life. Within the context of history, theory, and practice of urban design, the essays explore the city as a social entity that must be responsive to daily routines and neighborhood concerns and offer both an analysis of and a method for working within the social and political urban framework.

This expanded edition builds on the original essays focusing on the urban vernacular in Los Angeles with new material on interventions in Cambridge, Massachusetts, and Hoogvliet, near Rotterdam in the Netherlands. Discussion of the Latino community in Los Angeles is expanded with a survey of Latino signage, big, bold signs painted right on the walls defying all the principles of graphic design. The evolution of the mall, from the mini-mall, for quick convenience shopping, to midi-mall and macro mall, destinations in themselves, to the minicity, complete with residential and entertainment amenities, is presented as a new challenge for planners.

Editors John Leighton Chase, Margaret Crawford, and John Kaliski bring the discourse into the twenty-first century, examining the challenges and critical reaction to the approach and its application for the future.

John Leighton Chase (1953–2010) was an urban designer for the city of West Hollywood and an expert in Los Angeles architecture. He was the author of A Sidewalk Companion to the Architecture of Santa Cruz, Exterior Decoration: Hollywood’s Inside Out Houses, and a volume of collected essays, Glitter, Stucco, and Dumpster Diving.

Margaret Crawford is Professor of Urban Design and Planning Theory at the Harvard Graduate School of Design. She is the author of Building the Workingman’s Paradise: The Architecture of American Company Towns and editor of The Car and the City: The Automobile and Daily Urban Life in Los Angeles.

John Kaliski is a principal of Urban Studio, an architecture and city design firm in Santa Monica, California, and teaches urban studies and design studio at the Southern California Institute of Architecture. He is the author of numerous articles on urban design.