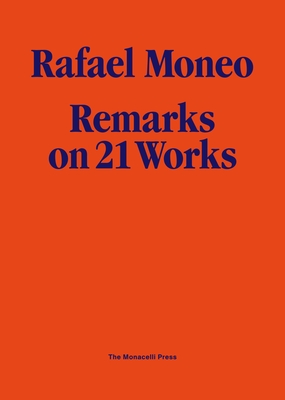 Rafael Moneo is a courageous architect, one who for decades has defined his own style of architecture. With a sensitivity to materials and context unmatched by any living architect, Moneo has created a series of important works, including the Audrey Jones Beck Building at the Museum of Fine Arts in Houston, Our Lady of the Angels Cathedral in Los Angeles, and, perhaps most notably, the extension to the Prado Museum in Madrid.

A teacher and critic, Moneo now turns his analytical eye to his own work. Twenty-one carefully selected projects are presented in detail, from the initial idea and through construction to the completed work and illustrated by a spectacular suite of new color images by architectural photographer Michael Moran. These are combined with Moneo’s own drawings as well as informal documentary material from the design of each of the projects.

Rafael Moneo is an internationally acclaimed architect based in Madrid. He has taught in both Spain and the United States, and from 1985 to 1990 he was the chair of the architecture department at the Harvard Graduate School of Design. He has received numerous awards and honors including the Pritzker Architecture Prize in 1996 and the Gold Medal of the Royal Institute for British Architects in 2003.
Loading...
or
Not Currently Available for Direct Purchase