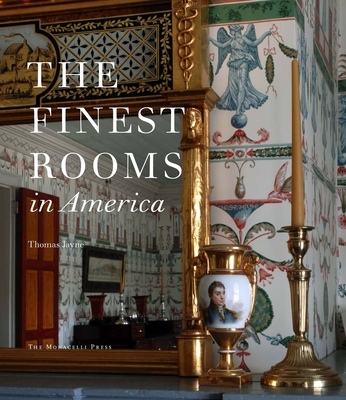 The Finest Rooms in America

The Finest Rooms in America: 50 Influential Interiors from the 18th Century to the Present is a selection by Thomas Jayne, one of America’s best decorators and scholars of American design. It is a definitive record of the finest American interior design with an authoritative text and  luxuriant color photography. The book includes a complete cross section of extant rooms covering a broad range of American periods and styles, beginning with the Tea Room at Jefferson’s Monticello and continuing to the present, concluding with Albert Hadley’s modern sitting room.

The rooms range from the opulent to rustic; they are traditional and modern and span the breadth of the country. Among those featured are the dressing room at Vizcaya in Miami, the living room at Frank Lloyd Wright’s Hollyhock House in Los Angeles, the dining room at the Saarinen House at Cranbrook Michigan, and the living room by Frances Elkins at Casa Amesti in Monterey, California. Prominent contemporary designers include Bunny Williams, John Saladino and Albert Hadley. Many of the rooms have never been published before and some are cherished classics.

Jayne’s engaging and erudite text places each room in context, identifying the elements that contribute to its success. Within the text he presents the idea that refinement is not about expense but about thought. This book ‘s  correct unique record make it a must-have volume for everyone interested in quality, American design and interior decoration.

Praise For The Finest Rooms in America…

“A definitive compendium of decorating that's begging to live on your bookshelf. Mr. Jayne, mega decorator himself and disciple of interiors legend Albert Hadley, has a refreshingly democratic eye (for a decorator) presenting an array of finery from the tippy top of society’s homes—tastefully jammed with important European furniture or, conversely, lean and tailored with collectible modern. It is a treat to have all of this catalogued in one swell tome.”
—The Wall Street Journal

Thomas Jayne, the New York decorator, has always brought both a scholarly
knowledge of design history and a quirky sense of the modern to his work, creating rooms that bridge the old and the new. And even though there is none of Jayne’s
own work in his new book, The Finest Rooms in America (The Monacelli Press),
his sensibility is evident in his choice of what the book’s subtitle calls “fifty influential interiors from the 18th century to the present.”
—TheNewYorkTimes.com

“A fascinating tour of the country’s most influential extant spaces, by
an always engaging, sharp-eyed guide.”
—Veranda

“Titling a book The Finest Rooms in America is an ambitious proclamation, but Thomas Jayne delivers a thorough and satisfying portrait of some of the most striking American interiors in this new book.”
—AOL.com (Shelterpop)


“Two hundred years of fine American interior design are
packed into this elegant new book.”
—Art of the Times (Florida)

Thomas Jayne was trained as a graduate fellow in the prestigious Winterthur program, as well as other leading museums. He studied architecture and art history at the University of Oregon and apprenticed with the august New York design firms of Parish-Hadley and Kevin McNamara. He has an international clientele that ranges from important collectors to young families, who live in a variety of settings, both historic and contemporary. Critics have noted that he writes with a “unique and quirky voice steeped in the history of decorative objects but cognizant of modern mores.” A principal at his firm Thomas Jayne Studio, he defines his decoration as embracing both ancient and modern.
Loading...
or
Not Currently Available for Direct Purchase