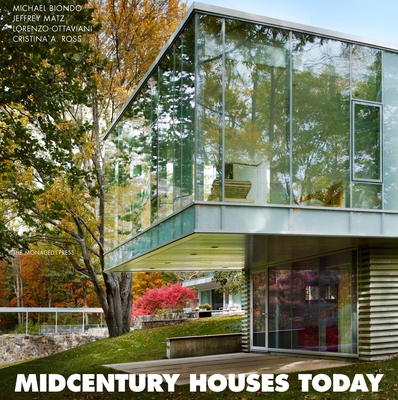 The bucolic New England town—a suburb of Manhattan—became the site of fervent experimentation by some of the leading lights of the movement in the United States, the architects known as the Harvard Five, whose modern aesthetic could be traced to the Bauhaus school of design. There they promoted their core principles: simplicity, openness, and sensitivity to site and nature, and built glass, wood, steel, and fieldstone houses that established architectural modernism as the ideal of domesticity in the twentieth century.

Architects Jeffrey Matz and Cristina A. Ross, photographer Michael Biondo, and graphic designer Lorenzo Ottaviani present this vanishing generation of iconic American houses as more than an issue of restoration or preservation, but as an evolving legacy that adapts to contemporary life. Selecting a representative group of sixteen houses covering the period between the 1950s and 1978, they portray each one in great detail, with floor plans, timelines, and both archival and luminous new photography—from the clean, minimalist look of the initial construction, to subsequent additions by some of the most significant architects of our time including Toshiko Mori, Roger Ferris, and Joeb Moore. Voices of the architects and builders, original owners and current occupants combine to describe how the houses are enjoyed and lived in today, and how the modernist residence is more than just a philosophy of design and construction, but also a philosophy of living.

"This elegant hardcover book showcases a selection of midcentury architecture in New Canaan, Connecticut. Each chapter focuses on a specific house, showing plentiful photographs of both the interior and exterior, while providing background information. The book takes a close look at residential modernism and how it has been adapted to contemporary life."
—Architectural Record

"Philip Johnson may have put New Canaan, Connecticut, on the architectural map with his Glass House, but he wasn't the only modern architect paying homage to the Bauhaus in this leafy suburb. Midcentury Houses Today documents the legacy of architectural masters such as Marcel Breuer, Landis Gores, Eliot Noyes, and Edward Durell Stone, who left their mark in New Canaan, and, most interestingly, the book looks at how these houses are lived in today."
—Remodelista

"In the 1940s and '50s, a klatch of iconoclastic architects gathered in New Canaan, CT, and began building a series of residential structures that promoted simplicity, openness, and a reverence for nature and the site surroundings. Midcentury Houses Today checks in on those incredible structures—and tells their life stories."
—Bloomberg.com

"America's longstanding epicenter of midcentury architecture, New Canaan is home to 91 surviving modern homes (of 118 originally built there). Midcentury Houses Today examines this concentrated residential modernism by following 16 houses and how they've adapted to contemporary life. Step into the world of midcentury modernism illustrated in vivid original and current photographs and floor plans. It sends the message that modern architecture is not static but lends itself to reinvention through time."
—Connecticut Cottages & Gardens

"An early black-and-white photo, an original and a contemporary plan, along with luscious color photography by Michael Biondo, represent each house. Legendary architectural editor John Morris Dixon provides a superb historical essay 'Then and Now,' which reminds us that these designers were considered 'by many townspeople as disruptive cultural rebels imposing their Ivy League ideals.' An intriguing aspect of this book is not just how these houses came to be, but how they have survived. It is not surprising that New Canaan has become a pilgrimage destination for Modern architecture mavens. The town’s Modern legacy constitutes an incredible treasure trove, far more authentic than, say, a Sturbridge Village or a Plimoth Plantation. We can be grateful for a study such as this."
—Design New England

"Every year design enthusiasts make the pilgrimage to this longstanding shrine of mid-century architecture, where ninety-one of the 118 modernist houses originally built still survive. This book looks at sixteen of them in detail to study the range of approaches that have led to their preservation and adaption to contemporary life; each house has a chapter of its own, with floor plans, archival shots of initial construction, and new photography of additions made by significant contemporary architects, such as Toshiko Mori, Roger Ferris, and Joeb Moore. Included, too, is a comprehensive timeline of the most famous projects, not only by the Harvard Five but also by Victor Christ-Janer, Edward Durell Stone, and Alan Goldberg."
—Modern magazine

Michael Biondo, Jeffrey Matz, Lorenzo Ottaviani,  and Cristina A. Ross formed the collaborative Moderns on Modern to study midcentury architecture and design in the belief that modern architecture is not static but seeks to reinvent itself as it adapts to new ways of life. Biondo is a fashion and architectural photographer whose work has appeared in numerous books and magazines. Matz is a practicing architect in Greenwich, Connecticut. Ross is an architect and preservationist based in New Canaan. Ottaviani is the creative director of  Lorenzo Ottaviani Design and the author of Travel Italia: The Golden Age of Italian Travel Posters.
Loading...
or support indie stores by buying on