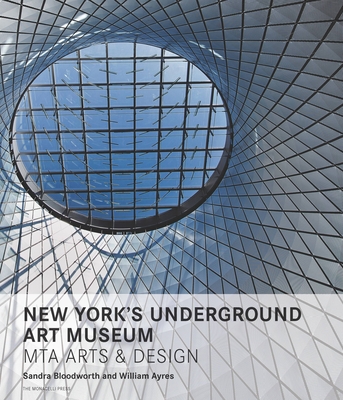 Initiated in 1985, the MTA Arts & Design collection of public art now encompasses more than 250 projects, creating a dynamic underground museum of contemporary art that spans the entire city and its immediate environs. Since the program was founded, a diverse group of artists—including Elizabeth Murray, Faith Ringgold, Eric Fischl, Romare Bearden, Acconci Studio, and many others—has created works in mosaic, terra-cotta, bronze, and glass for the stations of the New York City Subways and Buses, Metro-North Railroad, Long Island Rail Road, and Bridges and Tunnels.

An update of the classic Along the Way, this expanded edition features nearly 100 new works installed in stations since 2006, including Sol LeWitt’s Whirls and twirls (MTA) at Columbus Circle, Doug and Mike Starn’s See it split, see it change at South Ferry, and the James Carpenter/ Grimshaw/Arup Sky Reflector-Net at Fulton Center. The book illustrates how the program has taken to heart its original mandate: that the subways be “designed, constructed, and maintained with a view to the beauty of their appearance, as well as to their efficiency.” MTA Arts & Design is committed to preserving and restoring the original ornament of the system and to commissioning new works that exemplify the principles of vibrant public art, relating directly to the places where they are located and to the community around them.

The definitive guide to works commissioned by MTA Arts & Design, a reference for riders who have wondered about an artist or the meaning behind the art they’ve seen, as well as a memento for visitors, New York’s Underground Art Museum provides 300 color illustrations and insightful descriptions sure to infuse any future trip or viewing with a fresh appreciation and understanding of this historic enterprise.

"This is a good moment to take stock of Arts and Design (known until recently as Arts for Transit), as it approaches its 30th anniversary. The largest single artwork ever commissioned under the program, Sky Reflector-Net, by James Carpenter Design Associates, Grimshaw Architects and Arupis, is to go on view when the new Fulton Center opens in Lower Manhattan. The net—a 79-foot-high tapering, truncated cone of reflective aluminum diamonds set in a stainless-steel tracery—appears on the cover of New York's Underground Art Museum. Among the latest additions to the West End line, on the platforms of six elevated stations, windscreen panels of laminated glass display lovely translucent imagery. In case your D train is delayed, these works repay study. Some, like Odili Donald Odita’s Kaleidoscope at 20th Avenue and Amy Cheng’s Rediscovery at 25th Avenue, are large-scale abstractions that can be appreciated from a passing train."
—The New York Times

"Philip Johnson may have put New Canaan, Connecticut, on the architectural map with his Glass House, but he wasn't the only modern architect paying homage to the Bauhaus in this leafy suburb. Midcentury Houses Today documents the legacy of architectural masters such as Marcel Breuer, Landis Gores, Eliot Noyes, and Edward Durell Stone, who left their mark in New Canaan, and, most interestingly, the book looks at how these houses are lived in today."
—Remodelista

"The public art program of New York's Metropolitan Transportation Authority is both older and more extensive than most of us realize. This survey shows that the quality of the work is high indeed. Among the standouts: Roy Lichtenstein's porcelain-enamel cartoon murals, Sol LeWitt's ceramic tile Whirls and Twirls, Maya Lin's giant stainless-steel and fiber-optic mechanism tracing phases of the moon, a parade of pilasters in glass and enameled steel by Mary Miss with Lee Harris Pomeroy Architects, rows of brightly painted metal housefronts by Dennis Oppenheim, and, back at Astor Place, Milton Glaser's bold colors and forms derived from the beaver plaques."
—Interior Design

"There's another big art player in New York alongside the likes of the Met, MoMA, the Whitney, and the Guggenheim. Just like the hallowed halls of New York’s finest museums and galleries, the Metropolitan Transportation Authority has been collecting and displaying works by big-named artists. New York’s Underground Art Museum showcases all the masterful works that brighten the commute of millions each day."
—The Daily Beast

Sandra Bloodworth is director of MTA Arts & Design at the Metropolitan Transportation Authority. She received the Fund for the City of New York’s 2005 Sloan Public Service Award in recognition of her work in the field of public art.

William Ayres is an independent curator specializing in nineteenth- and twentieth-century American art and editor of 19th Century, the magazine of the Victorian Society in America.
Loading...
or
Not Currently Available for Direct Purchase