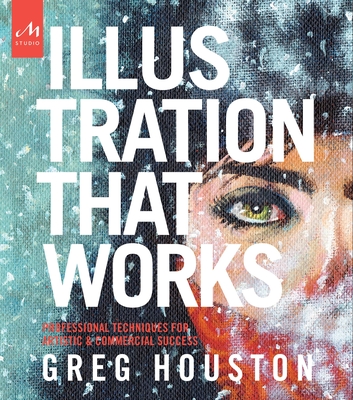 A straight-to-the-point “everything-you-need-to-know” guide to the world of professional illustration for aspiring artists and recent art-school graduates—not only the technical essentials (the difference between narrative versus conceptual illustration, diagramming a composition, mastering negative space, and the impact of different mediums from watercolor to digital to textiles), but industry insights, real-world insider advice, and honest personal development tips from an experienced teacher (“if you say your style is ‘manga’ or ‘anime’ then you have no style”).

From a Newsweek cover depicting the Bush family as characters on Game of Thrones; to the Sistine Chapel (the complete illustrated bible)—visual storytelling through illustration has been an important mode of communication in every culture since ancient times. Unlike a fine artist, an illustrator creates images that serve a specific purpose, and successful illustrators need much more than just talent.

Drawing on a decade of teaching, including at Maryland Institute College of Art and as cofounder of the new Baltimore Academy of Illustration, along with over three decades of professional experience as an illustrator for clients like Marvel Comics, Relapse Records, and The Village Voice—Greg Houston places aspiring artists and recent graduates squarely in the current marketplace, and inspires them to pursue work in the large and lucrative field of professional illustration in a way that will be personally and professionally rewarding for years to come. Illustration that Works demonstrates exactly why illustration is so important to the way we see and communicate today, and how it can be done effectively in an infinite number of styles.

Praise For Illustration that Works: Professional Techniques for Artistic and Commercial Success…

"If you’re an illustrator looking for guidance on how to create effective visuals that speak, this is the book you’ll want to read. Greg Houston’s lessons are delivered through short chapters with a right-to-the-point style that’s full of energy. Though at times the book takes on the tone of a well-meaning drill sergeant, it packs in a ton of practical information that ranges in style and genre, with plenty of examples and exercises for budding illustrators. Houston’s personal rules for success pop up intermittently between chapters."
—Communication Arts

"When it comes to commercial art, this is someone you’d want to listen to. So it’s fitting that he’s just published a book on the subject, Illustration That Works. As the title suggests, Houston’s blue-collared approach to a successful career in commercial art preaches a strong work ethic.

Written at a quick pace not usually found in vocational guides, Illustration That Works is certainly informative and it’s also entertaining as hell."
--AIGA Baltimore

Greg Houston was born and raised in Baltimore, MD (the Baltimore Orioles celebrated by winning their first World Series that fall). He earned his BFA from Pratt Institute and has been illustrating professionally since 1988. His portfolio is large and stylistically varied.

Greg has taught classes ranging from cartooning for kids to pre-college illustration classes, to courses for undergraduates and continuing studies students at Maryland Institute College of Art. He also teaches an online class for Craftsy. He is a cofounder of and instructor at the Baltimore Academy of Illustration, which opened fall 2015. He lives in Baltimore, MD, with his wife and cats.

www.greghoustonillustration.com
Loading...
or
Not Currently Available for Direct Purchase