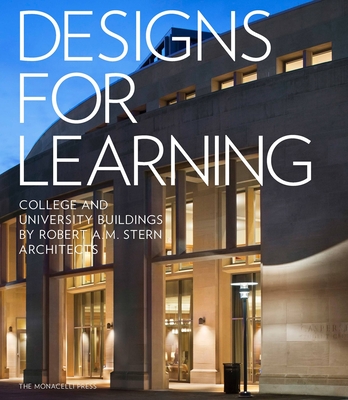 Through more than thirty projects for major colleges and universities across the country and in China, Designs for Learning presents the principles and practices behind academic buildings, libraries, graduate centers, and academic facilities that sensitively integrate into the fabric of each campus.

In its forty years, Robert A.M. Stern Architects has honed a contemporary practice that is in close dialogue with the past, making it one of the most admired architectural firms today. Even in its growing global reach and expanding practice areas, the firm maintains a close attention to form, context, local culture, and received tradition, as well as to the demands and needs of the building users.

These principles have served the firm particularly well on campuses, where architectural styles and building traditions are often well established. Robert A.M. Stern Architects has created classroom buildings, student centers, athletic facilities, and libraries that respect and expand those traditions. In each case, the firm demonstrates a deep understanding of the American college campus, with its roots in Thomas Jefferson's design for the University of Virginia. In their buildings, "the present, interacting with memories of the past, can create something that can be interesting in the future."

Each campus in Designs for Learning is described in detail, with historic photographs and campus plans illustrating its development. Projects by Robert A. M. Stern are placed in their context, providing a complete view of these distinguished places of learning.

"Despite its title, this monograph is about more than just designing buildings. Rather, the volume is a master class on creating entire environments for learning; it's as much about a special type of urban planning for educational communities as it is about creating individual structures.... Its pages are filled with handsome full-color images of each project—but it's not just a compilation of "beauty shots." Multiple views are provided of every building—both interior and exterior—so the reader can comprehend the character of each structure. To add to project understanding, photography is supplemented by campus ground plans plus floor plans of each building that was added."
—Traditional Building