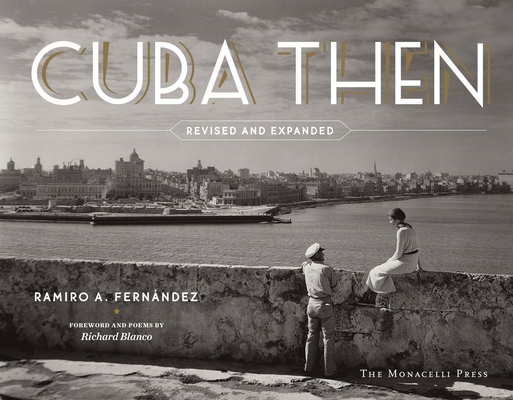 Following on the success of the first edition of Cuba Then (2014), this revised and expanded edition introduces more than 100 dazzling new images that build on the allure of Cuba, past and present.

In the last few years, Cuba has see seismic shifts in its politics and international standing: US-Cuba relations moved toward normalization, the US embassy was reopened, and Fidel Castro died. The intensified interest in Cuba has seen record numbers of Americans traveling there while they still can. In this climate, a new edition of Cuba Then will satisfy the growing curiosity around the country's history, adding to the visual culture and legacy.

With thirty new pages and more than 100 newly selected vintage photographs and pieces of ephemera from the collection of Ramiro A. Ferna&#769;ndez, the most extensive archive of Cuban photography and ephemera outside of Cuba, this book is a tribute to the lost eras of style, glamor, ebullience, intrigue, and upheaval. The more than 300 images here span the entire spectrum of photographic history, including rare nineteenth century daguerreotypes, cartes-de-visite, and stereoviews.

Much of Ferna&#769;ndez's collection is little seen and never published, presenting a rich spectrum of personalities spanning more than a century: aristocratic racecar drivers, movie actors and showgirls, magicians, spies, and campesinos. With an autobiographical introduction from the author, who was born in Havana, and peppered with selections from Richard Blanco's alluring poetry, these pages take readers inside circuses, concerts, filmsets, and street parades. From unlikely images of historical newsmakers (Fidel Castro drinking a Coca-Cola on a public bus) to a roster of jet-setting celebrities such as Celia Cruz, Winston Churchill, and Mari&#769;a Fe&#769;lix, Cuba Then is a welcome new edition of this seductive and lush photographic survey of the small island that continues to fascinate the world.

Praise For Cuba Then: Revised and Expanded…

"From turn-of-the-century street scenes to 1950s glamor, these images offer a window into that enchanting but complicated world."
—TIME


"The culling now presented in Cuba Then is indeed remarkable. Nearly every image is utterly captivating. The history this expanded volume recounts, in visually sumptuous and thematically rich layers, is the one that some of us have seen or heard less of—namely, the history of pre-revolutionary Cuba, a place Fernández describes as 'a hedonistic international playground.' The images pertaining to that place are the immediately transporting ones. The images that jar you back to reality and the precariousness of our times are those that foreshadow the turmoil and turnover soon to come to Cuba; the handful that depict the revolution do so with stunning candor."
—Hyperallergic

Ramiro Fernández was born in Havana to a family involved in the pharmaceutical industry. He left Cuba in 1960, settling first in Palm Beach County and then in New York, where he was a photography editor at Time Inc. for 25 years. He was involved in the launches of Entertainment Weekly and People en Español magazines and worked at Sports Illustrated and People. A witness to the Cuban Revolution in his youth, Fernández's consuming passion has been to build a photography collection to represent the Cuba he remembers. Today his collection numbers more than 8,000 items.

Richard Blanco, born in Madrid in 1968 to Cuban parents, immigrated to the United States and eventually worked as a civil engineer. He turned to writing and studying poetry and has become an award-winning author with books like City of a Hundred Fires and Directions to the Beach of the Dead. He is the United States' fifth inaugural poet, writing for President Barack Obama's 2013 ceremony.