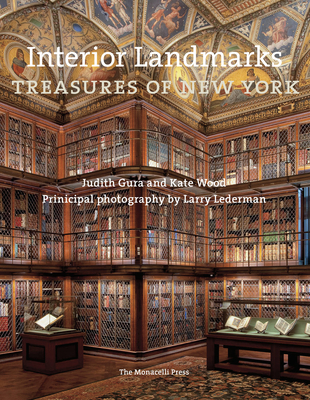 The first book to present great landmarked interiors of New York in all their intricate detail, Interior Landmarks is a visual celebration of space that captures the rich heritage of the city.

Since 1965, the New York City Landmarks Law has preserved for generations to come a remarkable number of significant spaces in New York City's cultural, social, economic, political, and architectural history. Not only do the exterior facades of these buildings fall within the law's purview, but many of their stunning interiors as well. Newly updated with current information, this book tells the stories of forty-six interior landmarks from the widely celebrated--Radio City Music Hall, the Great Hall of the Metropolitan Museum of Art, Grand Central Station--to others that are virtually unknown. A catalogue of all 120 interior landmarks, with names of their architects and locations, is also included.

Readers will learn about their original construction and style, their exceptional design features, materials, and architectural details, as well as the challenges to preserving them--whether they were unanimously accepted or hotly contested in legal battles--and the preservationists, philanthropists, politicians, and designers who made it possible. The book also includes updated details on the restorations or re-imaginings that took place. Combining strong visuals and thorough research, this valuable reference work will fascinate all readers with an interest in the city's history.

This paperback edition is updated with current information, including the 2017 addition of The New York Public Library's historic Rose Main Reading Room to the list of protected landmarks.

"This updated paperback edition doesn’t compromise the quality of Larry Lederman’s original photographs, nor does the addition of a gorgeous, glossy two-page spread spotlighting the luminous celestial ceiling mural of the New York Public Library’s Rose Reading Room. A must for lovers of architecture, history, and design and for anyone—tourist or native—who’s ever marveled at the marble, metal, wood, stone, plaster, and glass adorning the sanctuaries of New York’s notable buildings."


"Hidden inside New York City’s skyscrapers and low-rises are architectural gems carefully protected and preserved by dedicated patrons. A new book, “Interior Landmarks: Treasures of New York,” aims to raise awareness of these spaces and encourage appreciation for their art and design by offering a glimpse at 46 spaces recognized by the Landmarks Preservation Commission."
—amNewYork

"Lovers of New York history should make space on their shelves for this comprehensive volume." —Luxe Interiors + Design


"Forty-seven tales of interior landmarks in New York are highlighted in this book, capturing a slice of history and indoor space. Gura and Wood write with attention to detail about their picks, from the celebrated Grand Central Terminal and the infamous Tweed Courthouse to the dark corners of the Pierpont Morgan Library..."
—Metropolis

"While preservationists have saved many New York City facades from the wrecking ball, interiors have proven harder to protect. Interior Landmarks: Treasures of New York spotlights 47 preserved beauties, like Radio City Music Hall and the fantasy architecture of the Loew's Paradise Theatre in the Bronx."
—Elle Decor

"A living, breathing city can neither afford to exist as a museum nor lose its past. And in a city that changes as fast as New York, Interior Landmarks is a reminder that a fight for the right balance is never done and always necessary."
—The Atlantic's "CityLab"

Design historian Judith Gura is director of the Design History and Theory Program at the New York School of Interior Design and a contributing editor to Art & Auction magazine. Her previous books include Design After Modernism: Furniture and Interiors 1970-2010; New York Interior Design 1935-1985; and Sourcebook of Scandinavian Furniture: Designs for the 21st Century.

Kate Wood is a preservation specialist and an advisor to the Historic Districts Council. She is a principal in At Home in the Hudson Valley.

Larry Lederman is a noted photographer and the author of The Rockefeller Family Gardens: An American Legacy and Magnificent Trees of the New York Botanical Garden.