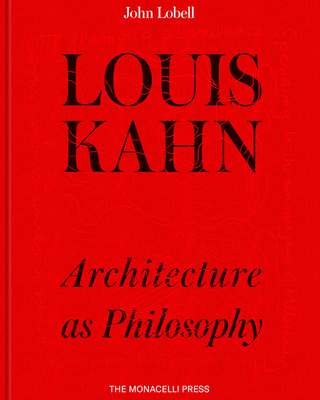 For everyone interested in the enduring appeal of Louis Kahn, this book demonstrates that a close look at how Kahn put his buildings together will reveal a deeply felt philosophy.

Louis I. Kahn is one of the most influential and poetic architects of the twentieth century, a figure whose appeal extends beyond the realm of specialists. In this book, noted Kahn expert John Lobell explores how Kahn's focus on structure, respect for materials, clarity of program, and reverence for details come together to manifest an overall philosophy. Kahn's work clearly conveys a kind of "transcendent rootedness"--a rootedness in the fundamentals of architecture that also asks soaring questions about our experience of light and space, and even how we fit into the world. In Louis Kahn: Architecture as Philosophy, John Lobell seeks to reveal how Kahn's buildings speak to grand humanistic concerns.
Through examinations of five of Kahn's great buildings--the Richards Medical Research Building in Philadelphia; the Salk Institute for Biological Studies in La Jolla; the Phillips Exeter Academy Library in New Hampshire; the Kimbell Art Museum in Fort Worth; and the Yale Center for British Art in New Haven--Lobell presents a clear but detailed look at how the way these buildings are put together presents Kahn's philosophy, including how Kahn wishes us to experience them. An architecture book that touches on topics that addresses the universal human interests of consciousness and creativity, Louis Kahn: Architecture as Philosophy helps us understand our place and the nature of well-being in the built environment.

“In this long overdue exploration of the ethical principles and philosophical themes grounding the work of Louis Kahn, Lobell lucidly presents the way Kahn’s buildings begin with essential insights into the nature of things, and then reveals how these are transformed into material experiences for the inhabitants. The book’s central theme is Kahn’s belief that because our lives quite literally take place in architecture, buildings must be made in such a way as to enrich, ennoble and give meaning to our experiences. Kahn believed that the most appropriate inspirations for design come from beginnings, and for those seeking a better understanding of Kahn's thinking, this book is an inspiring place to start.”
—Robert McCarter, architect, author, and Ruth and Norman Moore Professor of Architecture, Washington University in St. Louis

“John Lobell's book Louis Kahn: Architecture as Philosophy adds effectively to the Kahn legacy, and its clear order might even be said to echo the order of Kahn's buildings. I particularly appreciate the detailed analysis of materials, details, and structure.”
—David G. De Long, University of Pennsylvania

“[A] welcome and characterful look at one of the towering talents of our time.”
—Interior Design

“Serve[s] as a useful guide for any interested in appreciating more thoroughly this influential artist.”
—The New Criterion

“...illuminating. . . . [P]erfect for students of architecture, who should find Kahn a refreshing antidote to the formal excesses of the 21st century.”
—A Daily Dose of Architecture

John Lobell is a researcher, instructor, and lecturer on the subjects of architecture, creativity, and consciousness. A professor of architecture at Pratt Institute, Brooklyn, since 1980, he has lectured widely and is the author of numerous articles. He has studied and worked with major creative and cultural figures of the twentieth century, including mythologist Joseph Campbell; architects Louis Kahn and Robert Venturi; Buddhist masters Chogyam Trungpa, Robert Thurman, and the Dalai Lama; and Tai Chi master Cheng Man-Ch'ing.
His previous books include Between Silence and Light: Spirit in the Architecture of Louis I. Kahn (Shambhala, 1979/2008), which has sold 25,000 copies across two editions, Joseph Campbell: The Man and His Ideas (1993), and Visionary Creativity (2015).
Loading...
or support indie stores by buying on