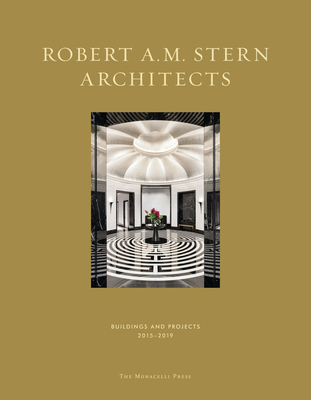 This comprehensive, lavishly illustrated survey of the most recent work of Robert A. M. Stern Architects, arguably the most versatile of the "starchitects," is an essential reference for architecture offices and libraries and an exceptionally handsome volume that will appeal to architecture aficionados.

Architect and architectural historian Robert A. M. Stern has garnered prestigious commissions across America and throughout the world, including, most recently, the Museum of the American Revolution in Philadelphia, residential towers in Manhattan, Washington, and Hangzhou, China, and major campus projects for the Kennedy School of Government at Harvard and Tsinghua University in Beijing. Deeply committed to the principle of building in context, Stern has no signature style. Instead his work speaks to the urban fabric that surrounds it, yielding a portfolio that is at once historically sensitive and responsive to contemporary life.

Architect, educator, and architectural historian, Robert A.M. Stern is the founding partner of Robert A.M. Stern Architects and former dean of the Yale School of Architecture. He is the author of the monumental five-volume history of New York's architecture and urban development, culminating with New York 2000. Stern was designated a Living Landmark by the New York Landmarks Conservancy in 2017 and received the Design, Academics, and Scholarship Award of Excellence from the Society of Architectural Historians in November. He is the subject of the documentary Robert A.M. Stern: Always a Student, produced by the Institute of Classical Art and Architecture.
Loading...
or
Not Currently Available for Direct Purchase