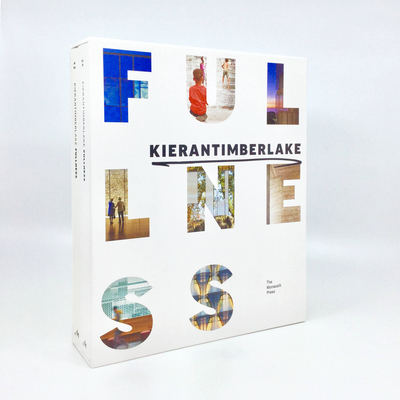 The third monograph by the firm KieranTimberlake, demonstrating its exacting, sophisticated, and elegant projects of the past decade.

KieranTimberlake: Fullness demonstrates the holistic impact of the work of the Philadelphia-based architecture firm. This monograph provides the concepts and contexts for seventeen recent projects in a range of scales and types, from houses to campus buildings to a transit hub and an embassy.
KieranTimberlake: Fullness demonstrates how the firm's formative values have combined with innovative design methodologies, a commitment to full-scale, in-house prototyping, and a collaborative ethos to create and realize works of ambitious scope and complexity. Organized in two volumes, this book illustrated the comprehensive range of architectural beauty present in KieranTimberlake's buildings and the evidence for their mastery of design at all scales and orientations.
The first volume presents photographs of each project, depicting the visual whole of the architecture as a fully resolved work. The companion volume reveals the sum of its parts--the pivotal junctures that give rise to final form, including both the moments of discovery and the pragmatic tools of analysis and prototyping that the firm uses. Narratives, drawings, diagrams, details, and anecdotes capture the design process and reveal the varied approaches that give form to the art and science of KieranTimberlake's architecture.
Projects in this book include a house made from prefabricated modules in rural California that minimally disturbed its picturesque site; a major renovation of Philadelphia's Dilworth Park in front of City Hall; Cellophane House (TM), a fully recyclable, energy-gathering dwelling; and the new US Embassy in London, designed to signify democratic ideals and exceptional environmental leadership with systems to reduce energy consumption.