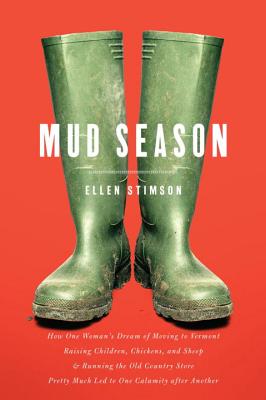 After a getaway in gorgeous rural Vermont—its mountains ablaze in autumnal glory, its Main Streets quaint and welcoming—Ellen Stimson and her family make up their minds even before they get back to St. Louis: “We’re moving to Vermont!” The reality, they quickly learn, is a little muddier than they'd imagined, but, happily, worth all the trouble.

In self-deprecating and hilarious fashion, Mud Season chronicles Stimson’s transition from city life to rickety Vermont farmhouse. When she decides she wants to own and operate the old-fashioned village store in idyllic Dorset, pop. 2,036, one of the oldest continually operating country stores in the country, she learns the hard way that “improvements” are not always welcomed warmly by folks who like things just fine the way they’d always been. She dreams of patrons streaming in for fresh-made sandwiches and an old-timey candy counter, but she learns they’re boycotting the store. Why? “The bread,” they tell her, “you moved the bread from where it used to be.” Can the citified newcomer turn the tide of mistrust before she ruins the business altogether?


Follow the author to her wit’s end and back, through her full immersion into rural life—swapping high heels for muck boots; raising chickens and sheep; fighting off skunks, foxes, and bears; and making a few friends and allies in a tiny town steeped in history, local tradition, and that dyed-in-the-wool Vermont “character.”


Praise For Mud Season: How One Woman's Dream of Moving to Vermont, Raising Children, Chickens and Sheep, and Running the Old Country Store Pretty Much Led to One Calamity After Another…

Get your schadenfreude ready. Stimson’s fish-out-of-water memoir is chockablock with self-deprecating, belly-laughable vignettes. Not since Betty MacDonald’s The Egg and I (1945) has anybody seemed more ill-suited to country life. And yet this born-and-bred Midwestern city dweller, having run up an enormous tab at her local Vermont country store, thinks, “Maybe I could run a quaint country store.” Visions of herself, husband John, and their Bernese Mountain dog, Eloise, greeting delighted customers with homemade breads and soups and cozy woodstove fires eclipsed all logic. They bought the store. Which sounds ominously like the phrase, they bought the farm. Which it may as well have been in the case of this former wholesale book businesswoman who seemed hell-bent on proving she had more money and credit than brains. Naturally, first thing, Stimson rearranged the store to suit her well-intentioned yuppie sensibilities. The locals stayed away in droves. Indeed, her first customers—staid, khaki-and-sensible-shoe-wearing native Vermonters—took one look at her “swingy” orange and purple outfit accessorized with jangly jewelry and thought she was a fortune teller. The experience foretold a very long acclimation and heaps of hilarious anecdotes. As for this book—come for the humor, stay for the recipes.

A picturesque family vacation in rural Vermont inspires Stimson and her husband to pay a visit to what they call the “Life Store” to shop for a new adventure: packing up their city life in St. Louis and moving into an old farmhouse in Dorset, VT (pop. 2,036). After taking over the old country store, they try to keep it afloat through the five Vermont seasons: spring, summer, fall, winter, and mud. But these city mice discover that country life is not exactly what they imagined. Moving the bread in the store inspires town-wide gossip. A hen in their “yuppie chicken coop” turns out to be a rooster. Stimson chases a goat while wearing a bathing suit and is forced to face the fragility of life when her family takes in lamb orphans. Mishap after mishap, Stimson compares their new life to “putting out a fire using a hose of gasoline.” VERDICT: Written with self-deprecating honesty, this memoir is for anyone who has ever gone on vacation and fantasized about staying.
— Library Journal

In her debut, former bookseller Stimson recounts relocating her family from St. Louis to the bucolic beauty of Vermont. The author and her husband John fell in love with Vermont on a getaway weekend. Years later, financially stable and in need of a change, they settled into a small Vermont town to enjoy the simplicity and beauty of the Green Mountains. That is when the trouble began, as Stimson brought in an out-of-state contractor and crew rather than hire local folks to fix her house. Then, in an impulsive moment, she bought the local country store with hopes of turning it into a high-volume gourmet shop. Though nothing really went as planned, the beauty of Vermont and its changing seasons gave Stimson solace. “There is no more naturally beautiful place I have ever been,” she writes, “and I have been to a bunch of them.” The author dramatizes the age-old conundrum of newcomers versus old-timers and the difficulties of fitting in—even if acceptance, in this case, only meant that the locals would not boycott the store after she moved the bread rack from the back of the store to the front, near the registers. Meanwhile, cats, dogs, sheep, chickens, goats and skunks traipsed through their idyllic setting, biting the minister and generally running amok. In a humorous, self-deprecating style, the author examines a variety of questions about her new life: In Vermont, what constitutes an emergency? When can you call 911? With aplomb, Stimson describes her rural Vermont setting, the changing seasons and what drew her to the state. A section of recipes—including “Lovely Fluffy Quiche” and “John’s Grandmother’s Roszke Cookies”—and the obituaries of three pets round out the volume. A quick, light book to keep around as a pick-me-up.
— Kirkus Reviews

Ellen Stimson is funny. Darned funny. And she knows how to spin a good, old-fashioned yarn. Stimson tells her tales with clear-eyed, self-deprecating humor, which makes Mud Season a breeze to read in a single sitting.
— Washington Post

Ellen Stimson is blessed with a wild pack of children; not-so-wild but completely adorable husband; and a very civilized group of chickens, dogs, and cats. Lately she's decided that she really wants a pig. She writes about the whole catastrophe from an old farmhouse in Vermont.
Loading...
or
Not Currently Available for Direct Purchase