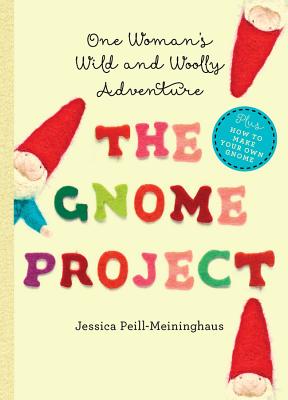 One Woman's Wild and Woolly Adventure

What do you do when life is too chaotic? How about felting a gnome? Or 365 of them, one for each day of the year.

Artist and wool crafter Jessica Peill-Meininghaus decided that she needed a project to teach herself follow-through in life. She settled on making one of her popular felted-wool gnomes every day for a year. With pipe cleaners and wool roving, amidst the chaos of raising four children and moving cross-country, Peill-Meininghaus felted her way through hundreds of charming, pointy-hatted, often bearded characters.

Lavishly decorated with photos of each charming creation, The Gnome Project is the surprising and magical story of what happens when we commit to something small. (Hint: It's something very big, as in making life more meaningful.) Here is her inspirational tale, complete with gnome-making instructions.

Jessica Peill-Meininghaus wet-felted her first piece—a ball—at the age of sixteen. After creating wet-felted gnomes and tapestries, she came across needle felting and was suddenly able to lend more detail to her work than ever before. Jessica has been selling her artwork for more than a decade. In addition to gnomes, she makes felted tapestries, felted books, felted coasters, and felted custom banners. Jessica and her husband live with their four children in Maine, having recently moved from Portland, Oregon. When she isn't felting, Jessica works with children with disabilities, homeschools her own children, and tends to the family's many animals. The Gnome Project is her first book.

Praise For The Gnome Project: One Woman's Wild and Woolly Adventure…

If you like shaping wool into charming, crafted objects through the process of needle felting, or if you like gnomes, then Jessica Peill-Meininghaus’s book is for you. But it would be a mistake to think that it is only about needle felting, or even about gnomes. Because it is also, and even essentially, about getting unstuck from that stuck place in your life by finding one simple thing to do consistently and well. Because doing one such thing will almost always lead to a second thing, and a third. And then you turn around and find miles between you and the place in the road where you thought you were pinned down forever.
— John Kralik, New York Times bestselling author of A Simple Act of Gratitude

In one of the most unique approaches I have ever encountered, Jessica Peill-Meininghaus illustrates the powerful impact of adopting a daily practice. With every turn of the page, there was humor, meaningful insight, and inspiration to be found. Who knew tiny, adorable objects could teach us so much about finding our life’s purpose and carrying it out?
— Rachel Macy Stafford, New York Times bestselling author of Hands Free Mama
or
Not Currently Available for Direct Purchase
Copyright © 2020 American Booksellers Association