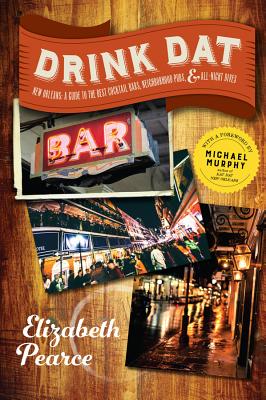 A Guide to the Best Cocktail Bars, Neighborhood Pubs, and All-Night Dives

New Orleans is an American city unlike any other, and its rich diversity is reflected in the world-class bar scene. In Drink Dat New Orleans, Elizabeth Pearce takes us on a tour of the city’s many unforgettable drinking spots, including a candle-lit tavern favored by pirates in the early eighteenth century and a watering hole so beloved by locals that several urns containing the ashes of former patrons rest in peace behind its bar. A Louisiana native and co-founder of the Southern Food and Beverage Museum, Pearce brings her lifelong love of food, beverage, and local lore to this ultimate drinker’s guide. From the nonstop parties on Bourbon Street to the classy cool of the Garden District, Drink Dat is the perfect way to explore America’s most spirited city.

Drinks Historian Elizabeth Pearce is the founder and owner of the company Drink & Learn, where she offers tours and presentations chronicling the history of United States through its iconic beverages. She is the Education Specialist for the Herbsaint and Peychaud’s Bitters brands. Pearce is also the co-author of the French Quarter Drinking Companion, and is a regular drinks column contributor to the New Orleans Advocate. She likes her whiskey neat.

You can learn more about her at drinkandlearn.com

Michael Murphy, a book publishing professional, has been a vice president at Random House, publisher of William Morrow, and founder of the literary agency Max & Co. By day two of his first visit to New Orleans in 1983, he knew he was home. He finally moved to New Orleans in 2009, and will never leave. Murphy is the author of Eat Dat, Hear Dat, and Fear Dat.
Loading...
or support indie stores by buying on