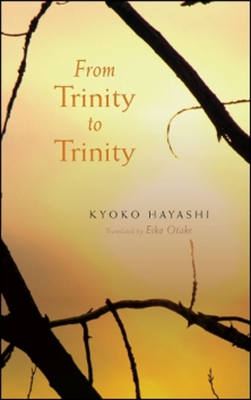 FROM TRINITY TO TRINITY

FROM TRINITY TO TRINITY recounts the pilgrimage of Japanese atomic-bomb survivor Kyoko Hayashi to the Trinity Site in northern New Mexico, where the world's first atomic bomb test was conducted. Her journey takes her into unfamiliar terrain, both past and present, as she not only confronts American attitudes, disconcertingly detached from the suffering of nuclear destruction, but discovers as well a profound kinship with desert plants and animals, the bomb's first victims. Translator Eiko Otake, a renowned artist in dance (Eiko & Koma), offers further insight into Hayashi's life and work, illuminating how her identity as outsider helped shape her vision. Together author and translator present one woman's transformation from victim to witness, a portrait of endurance as a power of being against all odds.

Kyoko Hayashi is a celebrated author born in Nagasaki. Spending most of her childhood in Shanghai, she returned in 1945 to her birth city. Having lived through that city's devastation, she eventually began to chronicle the stories of survivors. Hayashi first gained recognition on winning the prestigious Akutagawa Prize, and in 2005 the eight-volume KYOKO HAYASHI COMPLETE was published.
Loading...
or
Not Currently Available for Direct Purchase