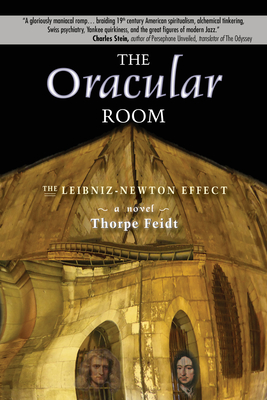 Something has gone wrong in the “pre-established harmony” between Divine Plan and the Best of All Possible Worlds! Souls and even material objects are being reborn in a chaos of cross-identities and anarchic phantasmagoria: historical epochs and personalities kaleidoscope and intertwine, and, most spectacularly, 17th century philosopher-mathematician Leibnitz’s “windowless monad” reincarnates as a drunkenly omniscient room that tumbles through time like the phone booth of Dr. Who.  Two extraordinarily gifted 19th century Massachusetts mediums publically channel G. W. Leibnitz and Isaac Newton, who perform minor miracles while carrying on their insults and counterclaims of yore. Thorpe Feidt’s long-awaited novel explodes with erudition and joy, exposing occult and not so occult forces at play in major reality claims. The ensuing tale is both crazily enigmatic and mind-bendingly refreshing. With its own species of magical realism, the novel proceeds with fugue-like repetitions and digressions à la Tristram Shandy and stirs up the infamous intellectual battle between Leibniz and Newton who, among other matters, both claim to have invented the calculus. If Herman Melville, Philip K. Dick, and Gabriel García Márquez incarnated in one body, the result could be The Oracular Room.

"Sad because E.T.A. Hoffman, Italo Calvino, and J.L. Borges are dead? Tired of bourgeois realism with its 'old, stale, passive empiricism'? Isn't it time you switched to The Oracular Room by Thorpe Feidt? You'll be glad you did! (although slightly haunted)." Peter Lamborn Wilson,  author of T.A.Z.: Temporary Autonomous Zones and Pirate Utopias

Thorpe Feidt was born in Philadelphia in 1940. He received a BFA from the Philadelphia Museum College of Art (now University of the Arts), and a MFA from Pratt Institute. He taught at Pratt Institute, Chestnut Hill Academy (Philadelphia), the University of New Hampshire at Manchester and beginning in 1973, Montserrat College of Art. Since the mid 1960s he has exhibited his work widely throughout the northeast, with one- person shows in New York City, Boston and Portsmouth, NH. He also participated in numerous two-person and group shows. His work is included in private collections across the country. This is his first novel.