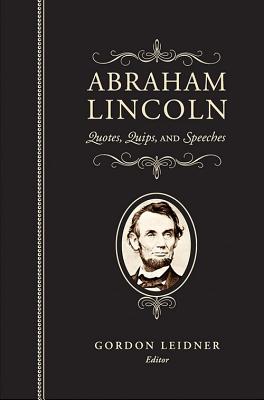 An Essential Book for Every Lincoln-Phile

Nearly 150 years after his death, the enduring legacy of a great president, an American success story, and the celebrated leader of the Civil War continues. Abraham Lincoln: Quotes, Quips, and Speeches is an illuminating and inspirational collection that captures the essence of the sixteenth president--a man revered for his integrity, faith, generosity, eloquence, humor, and determination.

A sample of Lincoln's wit and wisdom:

On honesty:
"You must remember that some things legally right are not morally right."

On common sense:
"Common-looking people are the best in the world; that is the reason the Lord makes so many of them."

On character:
"A man's character is like a tree and his reputation like its shadow; the shadow is what we think of it; the tree is the real thing."

Each of the twelve chapters also include shrewd observations of Lincoln from those who knew him best, including his wife, Mary Todd Lincoln, and his greatest political opponent, Stephen A. Douglas. Featuring excerpts from his most famous speeches as well as numerous photos, this timely tribute is the perfect gift for students, scholars, and history buffs everywhere.

GORDON LEIDNER has been a student of the Civil War and of Abraham Lincoln for more than twenty-five years. The author of numerous articles on Lincoln and the Civil War and a member of the board of the Abraham Lincoln Institute, he is a Webmaster of several Lincoln sites and maintains the website GreatAmericanHistory.com.
Loading...
or
Not Currently Available for Direct Purchase