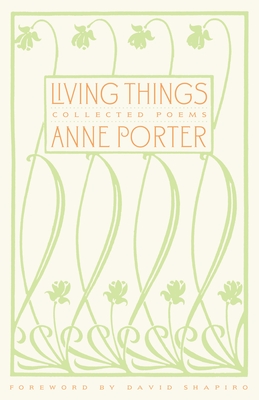 Living Things contains all the poems in Porter’s National Book Award Finalist collection, An Altogether Different Language, plus forty-four new works. David Shapiro writes in his foreword, “Anne Porter’s diction is as modest as that of William Carlos Williams or of a poet she nurtured as a houseguest for many years, James Schuyler. . . . She has the quality of paying attention to ultimate reality that Fairfield Porter, who painted her so often alone and with their five children, told me should be the conclusion of every sermon. . . . She is an American religious poet of stature who reminds us that the idea of the holy is still possible for us.” Living Things is a book for any lover of fine poetry, but will be particularly inspiring and meaningful to Christians whose faith is strong, and would make a beautiful gift.

"Porter's beautiful hymns to light, to friends and family, and to God, "an aeon / Of refining fire." Porter writes what might best be called plainsong: short, unadorned works that, like gospel or folk music, cut directly to the ambiguous heart of things. . . . It is a beautiful book, one in which fans of Virginian Hamilton Adair, Amy Clampitt and James Schuyler (often a guest at the Porter home) will find "That secret other poetry / Which never will be written." — Publishers Weekly

Anne Porter is the widow of artist Fairfield Porter. They raised five children together and she often served as the subject of his drawings and paintings. Though she has written poetry throughout her lifetime, she did not seek to publish her works until long after her husband’s death. Her first collection of poems, An Altogether Different Language, was a 1994 National Book Award Finalist.
Loading...
or support indie stores by buying on
(This book is on backorder)