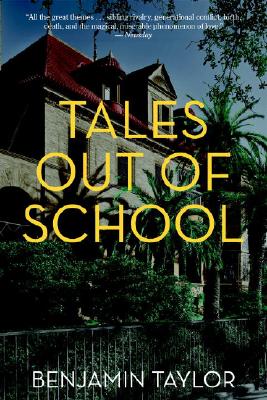 Tales Out of School

The strange hothouse world of Galveston Island, Texas, has been good to the Mehmels, German Jewish immigrants who prosper there in the late nineteenth century, and whose second generation is still flush as the century turns. But destruction - moral and natural, including the great hurricane that nearly destroyed the city - is not far off, and for bookish, fourteen-year-old grandson Felix, last of the line, salvation lies in self-discovery. Pried away from his Ovid and Virgil, he is seduced by the rough, handsome bully who has long taunted him. And over the sultry summer of 1907, he asserts his independence and launches into manhood even as his family's morale, sanity, and fortunes wane. Erotic as it is exalted, defiantly comic as it is sad, Tales Out of School is a timeless novel by a masterful contemporary writer.

Praise For Tales Out of School…

Winner of the Harold Ribalow Prize

"All the great themes... sibling rivalry, generational conflict, birth, death, and the magical, miserable phenomenon of love... The beauty of Taylor's language ratchets up and down from lyrical exposition to hardscrabble dialogue. His elaborate idiom allows him to sound certain metaphysical depths, to explore what he calls 'the abyss of humanness into which we reach, not knowing where the bottom lies.'" — Newsday

"Some prose invites being heard .... Benjamin Taylor's language is lush, exotic, at times peculiar, as befits a novel set in Galveston Island, Texas, where the extraordinary finds a fertile environment at the beginning of this century. Catholic, Jew, redneck, homosexual — these mix, marry, exchange vocabularies and dialects. Latin and Hebrew are sung on the Texas shore. It's a setting where Taylor feels confident to fit rare words to a rare locale." — The Riverfront Times (St. Louis)

“Dryly humorous and moving, learned and colloquial, lyrical and richly suggestive. …Taylor’s vision is an idealistic one, but it is nonetheless effective.” —Times Literary Supplement (London)

“Tales Out of School reads like a haunting and significant dream, the key to a precious life.” — Lily Tuck

“A lyrical evocation of time recaptured . . .[and]of stories interconnected and so hauntingly told that we are hypnotized by the sheer force of Taylor’s style. I have not read paragraphs this good, this informed about history…in quite some time.” — Sanford Pinsker (Philadelphia Jewish Exponent)

“A tale of the Tribe as enmeshed with the harebrained circumstance as it is with heretical myth. Classical resonance, I learn from reading this affectionate affabulation, has nothing to do with grand scale, it is the grand style that works the mystery—and the mischief. What a lovable, brilliant recital!” — Richard Howard

“I enjoyed the book immensely; it is a wonderfully beguiling vision.” — Amitav Ghosh

“The novel is about other days and other people: their eccentricities and interdependencies. But the wonder of this book is its style. Through that, it is made to be a story that draws the reader into an enchanting moment and holds the attention from sentence to sentence. Ben Taylor’s real achievement is to restore the tension and magic of song to narrative.” — Eavan Boland

“I didn’t want the book to end, and its long reverie stays with me.” — Rachel Hadas

“One of the great novels of the decade. If you have to, steal a copy.” — Gay Times (London)

Benjamin Taylor is also author of the novel The Book of Getting Even. He is the editor of The Letters of Saul Bellow, scheduled for 2010. His travel memoir, Naples Declared, will appear in 2011. He lives in New York City.
Loading...
or
Not Currently Available for Direct Purchase