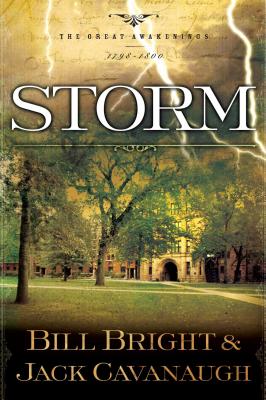 A storm of rebellion is gathering, and its dark clouds overshadow Yale College.

First-year student Asa Rush isn't surprised that he's one of a handful of Christians on campus. After all, he's been recruited by President Timothy Dwight to help bring revival to the school. Once a bastion of faith, Yale is now a hotbed of atheism, following on the tails of the popular French revolution.

But fellow student Eli Cooper is determined to make Asa's life miserable -- especially when both men fall in love with the sensuous, wealthy, and mysterious Annabelle Byrd. Just when Asa thinks things can't get worse, Dr. Dwight charges Asa with a shocking commission that shakes him to the core.

As America, barely two decades old, faces its first divisive presidential election, voters arm themselves in anticipation of the outcome. Asa and Eli are caught in the eye of the storm. Is the battle political or spiritual? Will the nation choose revolution or revival? And when the winds subside, who will be left standing?

Inspired by actual revival events, this third book in a series of four explores the personal and spiritual upheaval that occurs when the Holy Spirit stirs the waters of our souls.

"Watch American history unfold and come alive on these pages! Storm will not only captivate the reader but reminds us of our spiritual freedom that we should never forget is a gift! A must-read!"
-- Dr. Gary Smalley
Founder/CEO, Smalley Relationship Center

The late Bill Bright was founder and chairman of Campus Crusade for Christ International. He was a best-selling author of more than one hundred books and booklets including: Come Help Change the World, A Man Without Equal, and Have You Heard of the Four Spiritual Laws? which has distributed more than 2.5 billion copies.

Jack Cavanaugh is a popular historical fiction author. He has fifteen published novels which have received numerous Christian and secular awards. His novels While Mortals Sleep and His Watchful Eye won Christy Awards for excellence in Christian Fiction. The Puritans, from the American Portrait series, won an ECPA Silver Medallion Award.
Loading...
or support indie stores by buying on