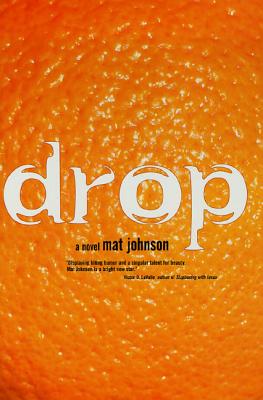 A new voice in American fiction recalling the work of Ralph Ellison and James Baldwin, Drop is an irreverent and unforgettable coming-of age-story about a 31-year-old black man who struggles to break out of the ghetto.

Chris Jones has a gift for creating desire-no doubt a result of his own passion and desire to be anywhere but where he is, to be anyone but himself. He has a knack for creating effective ad campaigns. His work lands him a gig in London. Far away from his Philly roots, Chris is raking in the dough, has a Nigerian girlfriend, a beautiful apartment, and goes clubbing in the West End. He enjoys the role of the successful black American, living among the bourgeois Africans and West Indians of London. No longer afraid of what he calls the 'Pop pop pop' of gunfire so prevalent on the streets of his hometown, Chris is finally free.

But life takes a turn for the worse, and Chris finds himself back where he started, forced back to Philadelphia where his only job prospect is answering phones at the electrical company, helping the poor pay their heating and lighting bills. Surrounded by his brethren, the down and out, indigent, the hopeless, Chris hits bottom. Only a stroke of inspiration and faith will get him back on his feet. Drop is a funny, moving and ultimately profound tale of a man determined to break the pattern of the ghetto he despises and who, in the process, is forced to come to terms with his hatred for himself.

Mat Johnson received his MFA from Columbia. He now lives in Harlem with his wife. He is currently at work on a literary horror novel that takes place in Harlem.