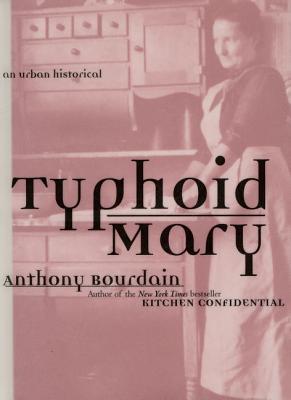 From the best-selling author of Kitchen Confidential comes this true, thrilling tale of pursuit through the kitchens of New York City at the turn of the century.

By the late nineteenth century, it seemed that New York City had put an end to the outbreaks of typhoid fever that had so frequently decimated the city's population. That is until 1904, when the disease broke out in a household in Oyster Bay, Long Island. Authorities suspected the family cook, Mary Mallon, of being a carrier. But before she could be tested, the woman, soon to be known as Typhoid Mary, had disappeared. Over the course of the next three years, Mary worked at several residences, spreading her pestilence as she went. In 1907, she was traced to a home on Park Avenue, and taken into custody. Institutionalized at Riverside Hospital for three years, she was released only when she promised never to work as a cook again. She promptly disappeared.

For the next five years Mary worked in homes and institutions in and around New York, often under assumed names. In February 1915, a devastating outbreak of typhoid at the Sloane Hospital for Women was traced to her. She was finally apprehended and reinstitutionalized at Riverside Hospital, where she would remain for the rest of her life.

Typhoid Mary is the story of her infamous life. Anthony Bourdain reveals the seedier side of the early 1900s, and writes with his renowned panache about life in the kitchen, uncovering the horrifying conditions that allowed the deadly spread of typhoid over a decade. Typhoid Mary is a true feast for history lovers and Bourdain lovers alike.

“[Bourdain] presents Mallon's story as a tale of hot pursuit, with the rude gusto and barbed wit that made Kitchen Confidential such a full-bodied pleasure.” —Adam Shatz, The New York Times Book Review

Anthony Bourdain (1956-2018) is the author of the bestselling Kitchen Confidential, the Urban Historical Typhoid Mary, and A Cook's Tour, which was turned into a successful series by the same name for the Food Network. His novels include The Bobby Gold Stories, Bone in the Throat and Gone Bamboo.
Loading...
or
Not Currently Available for Direct Purchase