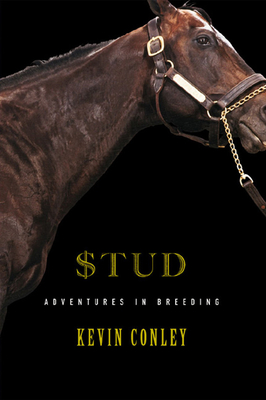 The most expensive thirty seconds in sports.

Every year, on Valentine's Day, the great Thoroughbred farms open their breeding sheds and begin their primary business. For the next one hundred and fifty days, the cries of stallions and the vigorous encouragement of their handlers echo through breeding country, from the gentle hills of Kentucky to the rich valleys of California. First appearing as an article in The New Yorker, Stud takes you into this strange and seductive world. We move from Lexington's Overbrook Farm, where the world's leading sire, Storm Cat, a lightly raced eighteen-year-old, brings in around thirty million dollars a year; to the auction halls, where sheiks and bookies (known more casually as the Doobie Brothers and the Boys) bid millions for Storm Cat's well-bred offspring. We visit Three Chimneys, where the twenty-seven-year-old Triple Crown winner Seattle Slew, a senior citizen by equine standards, makes a rousing return to active duty after spinal surgery, and stroll through Running Horse Farm, on the banks of the Rio Grande, where a nearly unmanageable colt, Devil Begone, has found peace and prosperity servicing desert mares like Patty O'Furniture. Cheap stud, top stud, old stud, wild stud, from the Hall of Fame horse to the harem stallion with his feral herd, Stud looks at intimate acts in idyllic settings (and the billion-dollar business behind them), providing a voyeuristic glimpse of just how human the equine world can be.

Kevin Conley is a staff writer at The New Yorker. His writing has appeared in Details, US Weekly, The New York Times Sunday Magazine, and Sports Illustrated. He lives in New York.
Loading...
or
Not Currently Available for Direct Purchase