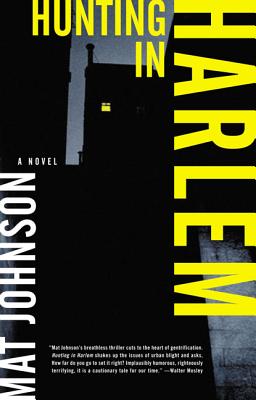 Horizon Realty is bringing Harlem back to its Renaissance. With the help of Cedric, Bobby, and Horus-three ex-cons trying to forge a new life-Horizon clears out the rubble and the rabble, filling once-dilapidated brownstones with black professionals handpicked for their shared vision of Harlem as a shining icon for the race. And fate seems to be working in Horizon's favor: Harlem's undesirable tenants seem increasingly clumsy of late, meeting early deaths by accident. As an ambitious reporter, Piper Goines, begins to investigate the neighborhood's extraordinarily high accident rate, Horizon's three employees find themselves fighting for their souls and their very lives-against a backdrop of some of the most beautiful brownstones in all of Manhattan.


Praise For Hunting in Harlem: A Novel…

“Johnson is eloquent in his prose and insightful in his commentary on contemporary urbanization and gentrification.” —New York Daily News

“This great thriller makes you consider what it takes to build a community.” —Honey magazine

Mat Johnson is the author of the novel Drop. He received his M.F.A. from Columbia. He spent several years living in Harlem and now lives in Rhinebeck, New York, with his wife and daughter.