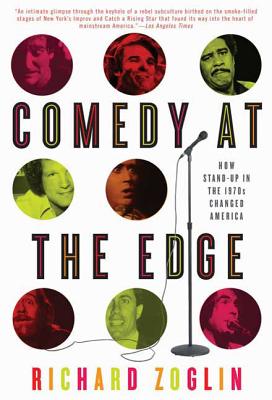 Comedy at the Edge (Paperback)

How Stand-up in the 1970s Changed America

When Lenny Bruce overdosed in 1966, he left behind an impressive legacy of edgy, politically charged comedy. Four short years later, a new breed of comic, inspired by Bruce's artistic fearlessness, made telling jokes an art form, forever putting to rest the stereotype of the one-liner borscht belt set. During the 1970s, a small group of brilliant, iconoclastic comedians, led by George Carlin, Richard Pryor, and Robert Klein, tore through the country and became as big as rock stars in an era when Saturday Night Live and SCTV were the apotheosis of cool, and the Improv and Catch a Rising Star were the hottest clubs around. That a new wave of innovative comedians, like Steve Martin, Albert Brooks, Robin Williams, and Andy Kauffman followed closely behind only cemented comedy's place as one of the most important art forms of the decade. In Comedy at the Edge, Richard Zoglin explores in depth this ten-year period when comedians stood, with microphone in hand, at the white-hot center of popular culture, stretching the boundaries of the genre, fighting obscenity laws, and becoming the collective voices of their generation. In the process, they revolutionized an art form. Based on extensive interviews with club owners, booking agents, groupies, and the players themselves, Zoglin traces the decade's tumultuous arc in this no-holds barred, behind-the-scenes look at one of the most influential decades in American popular culture.

Richard Zoglin is a senior editor and writer at Time, also serving as the resident television and film critic. In his 20 years covering entertainment for the magazine, he has written cover stories on Bill Cosby, David Letterman, Diane Sawyer, and Arsenio Hall, among others; and done major pieces on Jerry Seinfeld and Johnny Carson. He lives in New York City.


Praise For Comedy at the Edge: How Stand-up in the 1970s Changed America…

“Zoglin is a clear and informative writer. Comedy at the Edge is genial and good fun.” —New York Times

“An intimate glimpse through the keyhole of a rebel subculture birthed on the smoke-filled stages of New York's Improv and Catch a Rising Star that found its way into the heart of mainstream America.” —Los Angeles Times

“Sharp, perceptive history…Especially fascinating are tales about the inner politics of comedy clubs and the struggles of female comedians.” —Christian Science Monitor

“A very desirable addition for the pop-culture shelves.” —Booklist