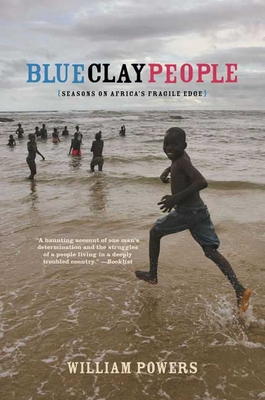 A haunting account of one man's determination and the struggles of a people living in a deeply troubled country.--Booklist

When William Powers went to Liberia as a fresh-faced aid worker in 1999, he was given the mandate to fight poverty and save the rainforest. It wasn't long before Powers saw how many obstacles lay in the way, discovering first-hand how Liberia has become a black hole in the international system--poor, environmentally looted, scarred by violence, and barely governed. Blue Clay People is an absorbing blend of humor, compassion, and rigorous moral questioning, arguing convincingly that the fate of endangered places such as Liberia must matter to all of us.

"A Masterful storyteller…Powers has a keen ear for dialogue and dialect, and his prose is lovely and lyrical…[His] honesty about his own flaws places him in the congregation rather than the pulpit."--Providence Journal

"So few educated Westerners agree to work in Liberia that any book illuminating the situation there would be welcome. It is a bonus that William Powers, one of those few, is also sensitive, reflective, and a fine stylist."--St. Louis Post-Dispatch

"Powers sketches scenes of transcendent beauty and grotesque violence, and writes with disarming honesty about his struggle to maintain his ideals when the right course of action is far from clear."--Publishers Weekly (starred review)

William Powers directed food distribution, agriculture, and education programs for the largest non-governmental relief group in Liberia. His commentaries on international affairs have appeared in the New York Times and on National Public Radio.
or
Not Currently Available for Direct Purchase