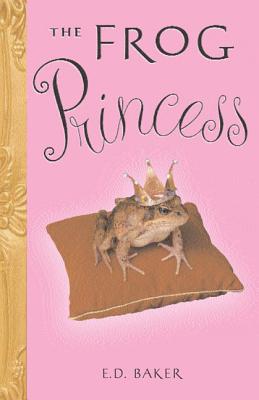 Princess Emeralda isn't exactly an ideal princess. Her laugh is like a donkey's bray rather than tinkling bells, she trips over her own feet and she does NOT like Prince Jorge, whom her mother hopes she will marry. But if Emma ever thought to escape her life, she never expected it to happen by turning into a frog! When convinced to kiss a frog so he might return to being a Prince, somehow the spell is reversed and Emma turns into a frog herself! Thus begins the adventure - a quest to return to human form.

Fascinating and hilarious characters ranging from a self-conscious but friendly bat to a surprisingly loyal snake and a wise old green witch confirm that readers won't soon forget this madcap story! A fantastic debut from the talented E.D. Baker.


Extract from The Frog Princess

The frog grinned from eardrum to eardrum. Straightening his smooth, green shoulders, he bowed from where his waist would have been if he'd had one. "I do apologize, Your Highness! If I had realized that you were such an exalted personage, I would never have made such churlish comments."

I groaned and rolled my eyes. "Give me a break! I hate it when people talk that way! I liked you better before you knew I was a princess."

E. D. Baker is the author of The Tales of the Frog Princess series, including The Frog Princess, which was in part the inspiration for a new Disney movie which will be released this fall (The Princess and the Frog). Baker is also the author of Wings: A Fairy Tale. She lives with her family and many pets in Maryland.
Visit www.edbakerbooks.com