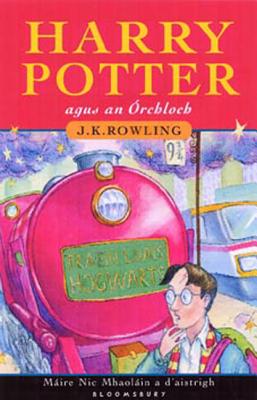 The Irish translation of the first Harry Potter book, "Harry Potter and the Philosopher's Stone," in which Harry Potter, a normal eleven-year-old boy, discovers that he is a wizard. Long ago, Harry's parents were killed in a battle with the evil Lord Voldemort. When we first meet Harry, he is living miserably with his repulsive and non magical (or Muggle) Aunt Petunia and Uncle Vernon Dursley, and their even more revolting son, Dudley. Following a bizarre but hilarious chain of events, Harry finds himself at Hogwarts School of Witchcraft and Wizardry with an outrageous cast of characters, including super smart Hermione Granger, vile Draco Malfoy, sinister Professor Snape, and wise Headmaster Albus Dumbledore. Adventures galore ensue.

J. K. Rowling was born in Chipping Sodbury in the UK in 1965. Such a funny-sounding name for a birthplace may have contributed to her talent for collecting odd names. Jo always loved writing more than anything, and in 1996, Bloomsbury bought her first novel, Harry Potter and the Philosopher's Stone. The rest, as they say, is Hogwarts history.
or
Not Currently Available for Direct Purchase