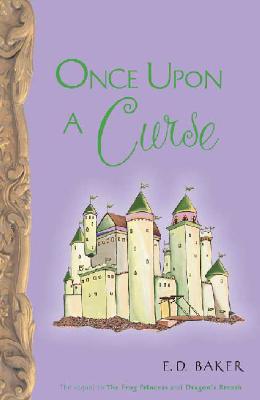 Once Upon a Curse

Many years ago a slighted fairy placed a curse on a beautiful young princess--a curse that caused her and all her female descendants to turn into mean, ugly witches if they ever touched a flower after turning sixteen. Now, Princess Emma, who is about to turn sixteen herself, is determined to break the spell once and for all. Emma travels back in time to the day the curse was placed on her ancestor in the hope of preventing the curse from being cast. Unfortunately she isn't successful in her efforts, but she does learn how to break it. Armed with this knowledge, Emma returns to her own time full of hope. But disaster ensues and Emma is about to give up completely--until true love shows itself in the most unexpected place of all.

With a bit of courage, a pinch of luck, and of course, a healthy dose of magic, Princess Emma charms her way through the third hilarious adventure in the Tales of the Frog Princess series.

E. D. Baker is the author of "The Tales of the Frog Princess" series, including "The Frog Princess," which was in part the inspiration for a new Disney movie which will be released this fall ("The Princess and the Frog"). Baker is also the author of "Wings: A Fairy Tale." She lives with her family and many pets in Maryland.
Loading...
or
Not Currently Available for Direct Purchase