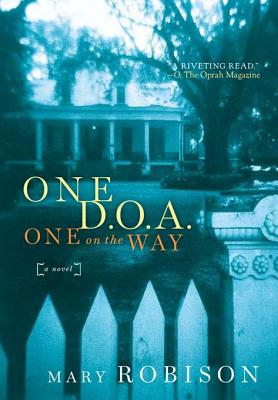 One D.O.A., One on the Way is a novel which opens on Jay, a location scout for a movie production company. She is complacently married to Alt, who has just been diagnosed with a grave illness and gone back to his palatial family home, back to the care of his parents. Which is just fine with Jay--or so she tells herself at the start. But standing left of center in this still-prosperous but mortally wounded family does not get easier as the weeks wear on. As she tries to negotiate her way around the anger of Saunders, Alt's despised twin brother; maintain her friendship with Petal, his beautiful wife; and protect what's left of the innocence of Collie, the niece caught in the middle, Jay finds more than the Louisiana heat oppressive.
With her trademark biting humor and breathtaking facility with minimalist language, Mary Robison, author of the award-winning Why Did I Ever, sets the stage for a beguiling Southern Gothic sure to delight her fanatical following and new readers alike.

Mary Robison is the recipient of a Guggenheim Fellowship, two Pushcart Prizes, an O. Henry Award, and the Los Angeles Times Book Prize for Fiction. She is the author of three previous novels, Oh! (1981), Subtraction (1991), and Why Did I Ever (2001), and of four story collections, Days (1979), An Amateur's Guide to the Night (1983), Believe Them (1988), and Tell Me (2002). Robison has written for Hollywood and has been a contributor to the New Yorker since 1977.
or
Not Currently Available for Direct Purchase
Copyright © 2020 American Booksellers Association