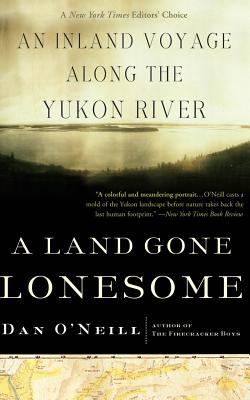 An Inland Voyage Along the Yukon River

In his square-sterned canoe, Alaskan author Dan O'Neill set off down the majestic Yukon River, beginning at Dawson, Yukon Territory, site of the Klondike gold rush. The journey he makes to Circle City, Alaska, is more than a voyage into northern wilderness, it is an expedition into the history of the river and a record of the inimitable inhabitants of the region, historic and contemporary. A literary kin of John Muir's Travels in Alaska and John McPhee's Coming into the Country, A Land Gone Lonesome is the book on Alaska for the new century. Though he treks through a beautiful and hostile wilderness, the heart of O'Neill's story is his exploration of the lives of a few tough souls clinging to the old ways-even as government policies are extinguishing their way of life. More than just colorful anachronisms, these wilderness dwellers-both men and women-are a living archive of North American pioneer values. As O'Neill encounters these natives, he finds himself drawn into the bare-knuckle melodrama of frontier life-and further back still into the very origins of the Yukon river world. With the rare perspective of an insider, O'Neill here gives us an intelligent, lyrical-and ultimately, probably the last-portrait of the river people along the upper Yukon.

Dan O'Neill is the author of A Land Gone Lonesome and The Last Giant of Beringia. He was named Alaska Historian of the Year by the Alaska Historical Society for The Firecracker Boys. He lives in Fairbanks, Alaska.
Loading...
or support indie stores by buying on