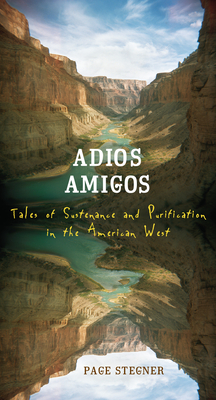 Tales of Sustenance and Purification in the American West

In this free-spirited collection of essays, Page Stegner weaves natural history, conservation polemic, ecology, and wilderness adventures on a number of the West's major white-water rivers. Stegner moves effortlessly from his own experiences on the Colorado, Yampa, Green, San Juan, Dolores, and Missouri rivers to first explorations by historical figures such as Lewis and Clark and John Wesley Powell, to modern controversies that threaten the continued unspoiled isolation of these special places. From its opening essay -- recalling a hilarious, albeit hazardous, journey down the Owyhee River in southeastern Oregon -- to the final episode on Lake Powell, Stegner's narrative is rich in vivid detail, laced with sardonic humor, and always grounded in a passion for the West -- both its past and the promise of its future.

Praise For Adios Amigos: Tales of Sustenance and Purification in the American West…

Each blistering chronicle of a cathartically death-defying river journey in a heartbreakingly beautiful or bruised place is an occasion for brusque history lessons, self-deprecating hilarity, and flinty ruminations on our abuse of western lands . . . this rapids rider dispenses tonic straight talk and irreverent humor from the eco-front.” Booklist