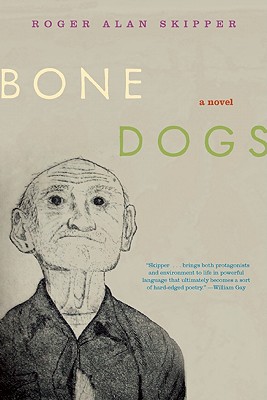 Tuesday Price is a wiseass, a boozer, and a loser. Only his wife Linda recalls a smarter, better man, and she’s losing faith in that man’s return. When Tuesday befriends a strange, silent Vietnam vet who eternally sits with a cooler of beer in a disabled pickup, Linda’s had enough. At her departure, Tuesday is left with only his new friend as a companionuntil the old vet is found dead, and Tuesday is blamed. Alone and haunted by regret, Tuesday’s daily life deteriorates until he must unearth his sordid past to reach a worthwhile future. But his past is a tangle of murder, deceit, and abandonment for which his only punishment has been self-inflicted. In order to reclaim all that has been lost, he returns to his deserted childhood home and, with hammer and nails, rebuilds the sagging structure, reassembling a history quite different than the one he’d believed while finding the future not at all what he’d expected.

"Skipper moves easily in dark terrain, but he’s also conversant with redemption; [Bone Dogs] bears an odd sense of charm that has roots in authentic characters and Skipper’s ease of language. This is a flinty novel of troubled times for these troubled times. Publishers Weekly

Bone Dogs is an exceptional novel, particularly impressive for its distinctive voice and vivid rendering of place. Roger Skipper is a writer who deserves a wide and appreciative audience.” Ron Rash, author of Serena

Bone Dogs is a truly amazing testament to the power of storytelling, and Tuesday Price, a poor drunk from Ransom, West Virginia, is one of the most beautifully rendered and flawed and honest characters in all of fiction. If Roger Alan Skipper doesn’t win prizes and acclaim for this novel, then I figure all of us writers better just pack it in and head for the hills.” Donald Ray Pollock, author of Knockemstiff

Skipper moves easily in dark terrain, but he’s also conversant with redemption; [Bone Dogs] bears an odd sense of charm that has roots in authentic characters and Skipper’s ease of language. This is a flinty novel of troubled times for these troubled times.” Publishers Weekly

Praise for The Baptism of Billy Bean

Skilled at developing memorable characters . . . brilliant . . . There is a delightful sense of country noir and world-weariness here that hard-boiled crime fans will savor.” Booklist

Praise for Tear Down the Mountain

A deeply resonate novel that peels away the stereotypes about Appalachia so we can see the real struggles of people fighting for the land and the life that is quickly disappearing. Skipper writes in the richly textured language that is unmistakably the voice of Appalachia.” Erik Reece, author of Lost Mountain

Skipper knows his characters and the worlds they inhabit or pass through, and he brings both protagonists and environment to life in powerful language that ultimately becomes a sort of hard-edged poetry.” William Gay, author of Twilight