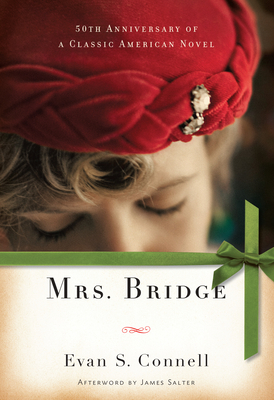 "Again and again. . . I find myself being a Mrs. Bridge evangelist, telling them that it’s a perfect novel, and then pressing copies on them. . . What writing! Economical, piquant, beautiful, true." —Meg Wolitzer, The New York Times

In Mrs. Bridge, Evan S. Connell, a consummate storyteller, artfully crafts a portrait using the finest of details in everyday events and confrontations. The novel is comprised of vignettes, images, fragments of conversations, events—all building powerfully toward the completed group portrait of a family, closely knit on the surface but deeply divided by loneliness, boredom, misunderstandings, isolation, sexual longing, and terminal isolation. In this special fiftieth anniversary edition, we are reminded once again why Mrs. Bridge has been hailed by readers and critics alike as one of the greatest novels in American literature.

Praise For Mrs. Bridge: A Novel…

"When I think about [Mrs. Bridge]. . . a variant of this exchange occurs to me: If you have already read it, that’s wonderful, for chances are you love it too, and know how brilliant it is. And if you haven’t read it, or perhaps have never even heard of it, well, that’s wonderful too, because you are still lucky enough to be able to read it for the first time. . . Again and again. . . I find myself being a Mrs. Bridge evangelist, telling them that it’s a perfect novel, and then pressing copies on them. . . What writing! Economical, piquant, beautiful, true." —Meg Wolitzer, The New York Times

"Mr. Connell writes of this woman without patronage, without snickers, without, indeed, any comment whatever on what he sets down of her life. He tells her story, less in sketches than in paragraphs, and how it is done I only wish I knew, but he makes Mrs. Bridge, her husband and her children and her neighbors understandable and, because understandable, moving, in his few taut words."" —Dorothy Parker, Esquire

""Mrs. Bridge is a hell of a portrait . . . She's as real and as pathetic and as sad as any character I have read in a long time."" —Wallace Stegner

Evan S. Connell was the author of eighteen books, including Francisco Goya, Deus Lo Volt!, Mrs. Bridge, and Son of the Morning Star. He received numerous awards, including the Los Angeles Times Book Prize, the Pushcart Prize, a Guggenheim fellowship, and an award in literature from the American Academy and Institute of Arts and Letters. He lived and worked in Santa Fe, New Mexico.
Loading...
or support indie stores by buying on