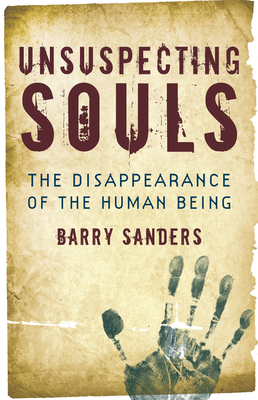 The Disappearance of the Human Being

In Unsuspecting Souls, Barry Sanders examines modern society's indifference to the individual. Beginning with the Industrial Revolution, when care for human beings began to disappear slowly, and ending with the modern era, when societal events require less person-to-person interaction and introduce radical changes in common attitudes toward death and life, Sanders laments that what makes us most human is slowly dying. Our days are filled with a continuous bombardment of "information" that demands our attention and brings us out of our world and into a sterile one of inhumanity and abstraction.
We've also lost the original sense of a collective consciousness. This loss has been culminating for two centuries now, dating back to the rise of European powers and worldwide colonization. We pick our poisons among several forms of radical fundamentalisms, each one not only a threat to the other but a threat to humanity itself. From references of Edgar Allan Poe to Abu Ghraib, this is a fascinating and worrisome story, impeccably researched and compellingly written.

Praise For Unsuspecting Souls: The Disappearance of the Human Being…

Praise for A Is for Ox

A brilliant, disturbing reflection on the collapsing moral order of post-modern America. If literacy is the wellspring of selfhood, as Sanders makes clear, our aggressive, image-addicted society is unwittingly committing cultural suicide.”
Mike Davis, author of Planet of Slums