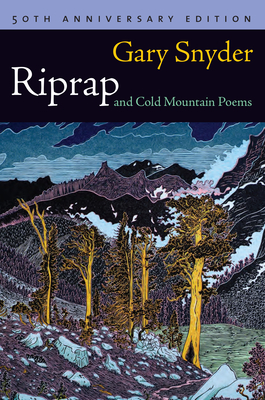 By any measure, Gary Snyder is one of the greatest poets in America in the last century. From his first book of poems to his latest collection of essays, his work and his example, standing between Tu Fu and Thoreau, have been influential all over the world. Riprap, his first book of poems, was published in Japan in 1959 by Origin Press, and it is the fiftieth anniversary of that groundbreaking book we celebrate with this edition. A small press reprint of that book included Snyder's translations of Han Shan's Cold Mountain Poems, perhaps the finest translations of that remarkable poet ever made into English.

Reintroducing one of the twentieth century's foremost collections of poetry, this edition will please those already familiar with this work and excite a new generation of readers with its profound simplicity and spare elegance.

Gary Snyder is the author of more than twenty collections of poetry and prose. Since 1970 he has lived in the watershed of the South Yuba River in the foothills of the Sierra Nevada. Winner of the Pulitzer Prize in 1975, Snyder has also been awarded the Bollingen Prize for Poetry and the Robert Kirsch Lifetime Achievement Award. His 1992 collection, No Nature, was a National Book Award finalist, and in 2008 he received the Ruth Lilly Poetry Prize. Snyder is a poet, environmentalist, educator and Zen Buddhist.
Loading...
or support indie stores by buying on
(This book is on backorder)