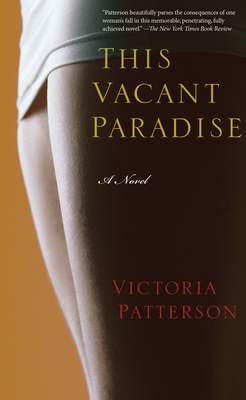 Esther lives with her grandmother, a virulent matriarch who controls her family through her wealth. Esther knows that an advantageous marriage replete with social standing, familial and peer approval, and financial rewards will alleviate her struggles. But she has been known to self–sabotage, and her loved ones are rooting for her not to blow it with her latest beau, especially since she’s at the ripe old age of thirty–three.

All is well until she begins a tumultuous love affair with Charlie, a local college professor known for his unconventional ideals as much as for his golf game and good looks. He sets a fire inside Esther, sparking and delivering her—whether by choice or not—from the insular, safe, and stifling confines of societal expectations to an alternate, unglamorous, and indefinable course. The result is a stunning debut novel: a powerful work of fiction sure to provoke and engage.

“Patterson writes with the exuberance of a natural storyteller. Her cast is rich, her narrative sinuous and masterfully structured.” —San Francisco Chronicle

Praise For This Vacant Paradise: A Novel…

Praise for This Vacant Paradise

"Patterson writes with the exuberance of a natural storyteller. Her cast is rich, her narrative sinuous and masterfully structured." —San Francisco Chronicle

"With echoes of a modern–day House of Mirth, Patterson's elaborate tale examines the complexities and contradictions of society, family, and personal desire." —Booklist

"Considering the subject matter—the real housewives of Orange County—Patterson's debut novel (after story collection Drift) is surprisingly sophisticated and nuanced. In debt and unmarried, Esther Wilson works at a clothing boutique and lives with her wealthy grandmother, Eileen, whose financial generosity is orchestrated to "encourage dependence." Terrified of poverty, Esther is in the midst of securing a proposal from an unattractive but wealthy heir, but she blows it. Enter ex–boyfriend Charlie Murphy, who, though from a well–off family, is a liberal–minded sociology professor at the local community college, and therefore an object of Eileen's derision. Charlie takes it upon himself to emancipate Esther from the chains of vapid privilege, but with a huge inheritance imminent for him and nasty gossip circulating about Esther, Charlie's lefty enlightenment dims. As an acerbic commentary on mid–'90s Southern Californian excess, the novel walks a fine line between critic and unintentional participant—commentaries on the retrograde position of Orange County women jostle against overindulgent physical description—though Patterson's Southern California has echoes of Nathanael West and early Bruce Wagner." —Publishers Weekly

"This Vacant Paradise is that truly rare thing, a first novel that arrives with its writer working at the height of her intellectual gifts and creative powers." —Jane Vandenburgh, author of Architecture of the Novel and A Pocket History of Sex in the Twentieth Century

"This is an exceptional novel, populated by several memorable and deftly rendered characters, each presented with nuance and compassion. Patterson taps deeply into their humanity, and the outcome is striking and dark." —Michael Jaime–Becerra, author of This Time Tomorrow

"This Vacant Paradise is an enthralling reinterpretation of The House of Mirth that reminds us that there are contemporary Lily Barts. Esther Wilson—what a character! Her sense of integrity and her desire for love are so understandable, yet they continually bring her into conflict with her materialistic family and acquaintances in Newport Beach. Has the last hundred years of advances in women's rights made a difference to the woman raised to marry for money? Victoria Patterson asks this fascinating question, and the answer makes for a completely engaging novel." —Alice Elliott Dark, author of Think of England and In the Gloaming

"Set against the affluence of Newport Beach, Patterson's debut collection often focuses on the enclaves—outcasts, waitstaff, divorcées, alcoholics, and drug addicts—as her characters confront personal battles, the limits of friendship, and the bleary anticipation of a different life. Patterson's thirteen engaging tales offer keen perspectives on life lived on the fringe." —Booklist

"Patterson's unflinching account of the seedy side of a real–life Xanadu is frightening, immersive, and wonderfully realized." —Publishers Weekly (starred review)

"Victoria Patterson's Newport Beach is a privileged world of wealth and heedless consumption that trails a wake of human damage. By giving us nuanced portraits of the sidelined, she somehow evokes the complex, glittering whole. Patterson is our generation's heir to John O'Hara and Edith Wharton. And nobody else writes about female sexuality with such sensitivity and fearlessness. Several times, I had to put this book down just to catch my breath." —Michelle Huneven, author of Jamesland and Round Rock

"Victoria Patterson's beautiful stories break our hearts as they inform us. Through her characters we see the complications and trauma of not fitting in with one's surroundings, in a version of California we are rarely allowed to see. Haunting, affirming, and often comic, her stories make the reader grateful for this writer's documentation of our human alienation—and our unexpected bonds. Patterson is a gifted storyteller, a fresh, essential new voice." —Dana Johnson, author of Break Any Woman Down

"Victoria Patterson has enormous talent and I suspect we'll be hearing a lot more from her." —James Lee Burke, author of the Dave Robicheaux series

"If I could write just a single story as beautiful and heartbreaking and intelligent as the thirteen linked together in Drift, I'm pretty sure that I could die a happy man. Victoria Patterson makes me envious as hell, and I applaud her for it." —Donald Ray Pollock, author of Knockemstiff