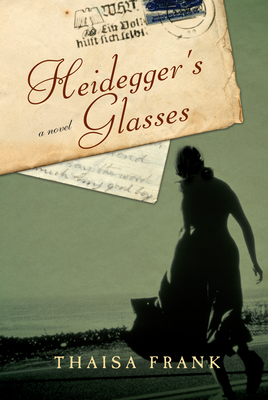 An occult Nazi program is threatened by a philosopher’s letter to a friend in this “stunning work, full of mystery and strange tenderness” (Dan Chaon).

In the waning days of World War II, Nazi Germany is coming apart at the seams. Yet the death machine continues to churn. The Third Reich’s obsession with the astral plane has led to the formation of an underground compound of scribes—translators charged with answering letters addressed to concentration camp inmates who are most likely dead.

Into this covert compound comes a letter written by eminent philosopher Martin Heidegger to his optometrist, a prisoner of Auschwitz. Goebbels himself has demanded a response. But the mere presence of Heidegger’s words—one simple letter in a place filled with letters—sparks a series of events that will ultimately threaten the safety of the entire compound.

With this debut novel that is part thriller and part meditation on how the dead are remembered—and with threads of Heidegger’s philosophy woven throughout—Thaisa Frank deftly reconstructs the landscape of Nazi Germany in “a spellbinding, innovative, intellectually compelling tour–de–force” (Michelle Huneven).

Praise For Heidegger's Glasses: A Novel…

"A tour de force whose imagery haunts the reader long after the final page is turned." —Jim Moret, author of The Last Day of My Life

"This is stunning work, full of mystery and strange tenderness. Thaisa Frank has written one of the most compelling stories of the Nazi regime since D. M. Thomas's Pictures at an Exhibition. It is a book that will haunt you." —Dan Chaon, author of Await Your Reply

"Frank's vision of the Holocaust is original and startling, with compelling characters and a narrative that's both explosive and ponderous."—Publisher's Weekly (starred review)

"A spellbinding, innovative, intellectually compelling tour–de–force. Thaisa Frank's imagination is boundless: she enchants and horrifies and moves us, often on the same page." —Michelle Huneven, author of Blame

Thaisa Frank is the recipient of two PEN awards, and her two most recent story collections were nominated for the Bay Area Book Reviewer's Association Award. She has taught writing in the graduate department of San Francisco State University, is on the part–time faculty at the University of San Francisco, and has been Visiting Associate Professor of Creative Writing at the University of California, Berkeley.
Loading...
or
Not Currently Available for Direct Purchase