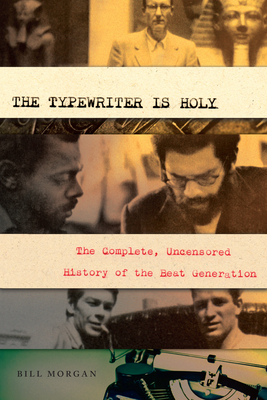 The Typewriter Is Holy

The Complete, Uncensored History of the Beat Generation

Anyone who cares to understand the cultural ferment of America in the later twentieth century must know of the writings and lives of those scruffy bohemians known as the Beats.

In this highly entertaining work, Bill Morgan, the country's leading authority on the movement and a man who personally knew most of the Beat writers, narrates their history, tracing their origins in the 1940s to their influence on the social upheaval of the 1960s.

The Beats, through their words and nonconformist lives, challenged staid postwar America. They believed in free expression, dabbled in free love, and condemned the increasing influence of military and corporate culture in our national life. But the Beats were not saints. They did too many drugs and consumed too much booze. The fervent belief in spontaneity that characterized their lives and writings destroyed some friendships.

As we watch their peripatetic lives and sexual misadventures, we are reminded above all that while their personal lives may not have been holy, their typewriters and their lasting words very much were.

Praise For The Typewriter Is Holy: The Complete, Uncensored History of the Beat Generation…

Praise for The Typewriter Is Holy

"Morgan brings a productive career of chronicling the mid–twentieth–century writers known as the Beats to a fine point with this thorough popular history that eschews criticism to concentrate on who was where, doing what, when . . . [The Typewriter Is Holy] must be regarded as the just–the–facts–ma'am basic text on the most important literary phenomenon of post–WWII America." —Booklist (starred review)

"Helpful, even necessary . . . a book that tries to put the far–reaching Beat tentacles and vast Beat cultural legacy into perspective." —The New York Times

"Concise and well–crafted, Morgan has written an enjoyable and informative book." —PopMatters

"The Typewriter Is Holy is a wonderful romp, a totally engrossing history of the Beat generation, and those wildly colorful figures who brought about a seismic change in our culture. It makes sense of the intersecting lives of Allen Ginsberg, Neal Cassady, William Burroughs and others whose great adventures gave birth to the upheavals of the Sixties. No one alive knows these people as well as Bill Morgan does, and the result is a fascinating chronicle." —Dinitia Smith, author of The Illusionist and Remember This

"At long last we have a first–rate history of the Beat Generation! Bill Morgan's The Typewriter Is Holy not only explores the enduring revolutionary appeal of Jack Kerouac, Allen Ginsberg, and William S. Burroughs but proudly brings marvelous lesser known Beat artists like Alan Ansen and Joanne Kyger into the Main Game mix. A masterful synthesis brimming with clarity and erudition" —Douglas Brinkley, Professor of History at Rice University and editor of Windblown World: The Journals of Jack Kerouac, 1947–1954

"Bill Morgan draws on an encyclopedic knowledge of the Beat writers to shine sober, sympathetic light into the dark corners of four tortured lives. His painfully personal profiles of Allen Ginsberg, Jack Kerouac, Neal Cassady and William Burroughs show how their misguided search for personal freedom trapped them in their own obsessions and addictions, yet also sparked an enlivening burst of creative genius." —Don Lattin, author of The Harvard Psychedelic Club: How Timothy Leary, Ram Dass, Huston Smith, and Andrew Weil Killed the Fifties and Ushered in a New Age for America

Bill Morgan is a painter and archival consultant working in New York City. He is the author of numerous books about Beat Generation history and its writers, most recently The Beats Abroad: A Global Guide to the Beat Generation, Peter Orlovsky: A Life in Words, and The Typewriter is Holy: The Complete, Uncensored History of the Beat Generation. He has edited collections of writing and correspondence of many of the Beat Generation's most important authors, including Ginsberg, Ferlinghetti, Kerouac, Burroughs, Snyder and Corso. He is a painter and a Civil War expert, and has worked as an archivist for Lawrence Ferlinghtetti, Allen Ginsberg, Abbie Hoffman, Diane diPrima, Oliver Sacks, Arthur Miller and Timothy Leary among others.
Loading...
or support indie stores by buying on
(This book is on backorder)