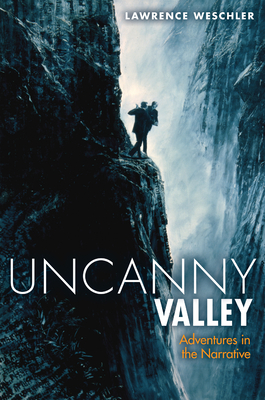 Adventures in the Narrative

Shuttling between cultural comedies and political tragedies, Lawrence Weschler's articles have throughout his long career intrigued readers with his unique insight into everything he examines, from the ordinary to the extraordinary.

Uncanny Valley continues the page–turning conversation as Weschler collects the best of his narrative nonfiction from the past fifteen years. The title piece surveys the hapless efforts of digital animators to fashion a credible human face, the endlessly elusive gold standard of the profession. Other highlights include profiles of novelist Mark Salzman, as he wrestles with a hilariously harrowing bout of writer's block; the legendary film and sound editor Walter Murch, as he is forced to revisit his work on Apocalypse Now in the context of the more recent Iraqi war film Jarhead; and the artist Vincent Desiderio, as he labors over an epic canvas portraying no less than a dozen sleeping figures.

With his signature style and endless ability to wonder, Weschler proves yet again that the "world is strange, beautiful, and connected" (The Globe and Mail). Uncanny Valley demonstrates his matchless ability to analyze the marvels he finds in places and people and offers us a new, sublime way of seeing the world.

Praise For Uncanny Valley: Adventures in the Narrative…

"Former New Yorker staff writer Weschler (The Passion of Poland) gathers the finest fruits of the last 15 years in this delectable collection. The title piece, a metaphysical twist on digital animation, discusses reality and trickery with the arbiters of "algorithmic" expressions and deftly reinforces the importance of strong narrative in order to captivate "our ensouled and incarnate natures." Weschler's intense allusions are rarely straightforward, as in "Three Improbable Yarns," a marvelous mesh of Jewish identity, human rights, and past work in the Balkans. An avant–garde Berlin showcase of his grandfather Ernst Toch's best concerto flows into a discourse on life and death, then inspires a sublime comparative essay of Milosz's "In Rome" and Szymborska's "Reality Demands," with Weschler in his element and the reader under his spell. His regard for visual and performance art proves mesmerizing in an initially unnerving account of the Danish Billedstofteater that morphs into a serene inference to the "current crisis of vision." Though rambunctious satire sends some adventures off in new directions, Weschler provides elegant and worthwhile conclusions. —Publishers Weekly (starred)

Lawrence Weschler is regarded as one of the leading practitioners of literary nonfiction. His essays have appeared in The New Yorker for over twenty years, and his series of "Convergences" is a regular feature in McSweeney's Quarterly. The recipient of a Lannan Literary Award and the National Book Critics Circle Award for Criticism, he currently teaches at New York University.
Loading...
or
Not Currently Available for Direct Purchase