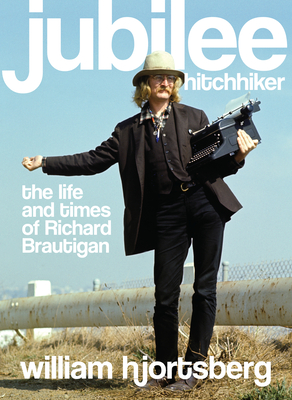 "Brautigan's life unfolds as a tragicomedy, and the book vividly evokes the heady 1960s and 1970s, especially in the Bay Area." --The San Francisco Chronicle

Confident and robust, Jubilee Hitchhiker is an comprehensive biography of late novelist and poet Richard Brautigan, author of Trout Fishing in America and A Confederate General from Big Sur, among many others. When Brautigan took his own life in September of 1984, his close friends and network of artists and writers were devastated though not entirely surprised. To many, Brautigan was shrouded in enigma, erratic and unpredictable in his habits and presentation. But his career was formidable, an inspiration to young writers like Hjortsberg trying to get their start. As Hjortsberg guides us through his search to uncover Brautigan as a man, the reader is pulled deeply into the writer's world. Ultimately this is a work that seeks to connect the Brautigan known to his fans with the man who ended his life so abruptly in 1984, while revealing the close ties between his writing and the actual events of his life. Part history, part biography, and part memoir, this etches the portrait of a man destroyed by his genius.

"It's Hjortsberg's ability to work like a novelist--to shape his mountain of material, the enormous chaos of Brautigan's life, into a narrative--that makes Jubilee Hitchhiker most remarkable." --Harper's Magazine

"One of the merits of Jubilee Hitchhiker is that it not only tracks Brautigan's life but also deftly flips open any number of worlds, from the Beat and counterculture scenes in San Francisco to gonzo times in Montana." --The New York Times


Praise For Jubilee Hitchhiker: The Life and Times of Richard Brautigan…

Hjortsberg does yeoman's genealogical research and writing, Brautigan's life unfolds as a tragicomedy, and the book vividly evokes the heady 1960s and 1970s, especially in the Bay Area, as lived by a "deeply strange" literary figure.”
Steve Heilig, The San Francisco Chronicle

William Hjortsberg is the author of eight books, including Alp, Gray Matters, and Falling Angel, as well as the screenplays Legend and Thunder & Lightning. He lives in Montana with his wife, painter Janie Camp.
Loading...
or
Not Currently Available for Direct Purchase