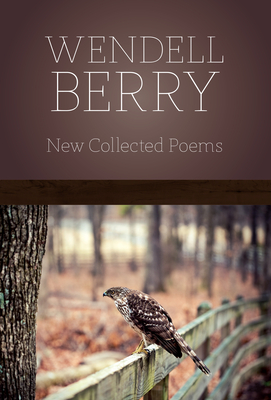 Here, Wendell Berry revisits for the first time his immensely popular Collected Poems, which The New York Times Book Review described as "a straightforward search for a life connected to the soil, for marriage as a sacrament, and family life" and " returns] American poetry to a Wordsworthian clarity of purpose." In New Collected Poems, Berry reprints the nearly two hundred pieces in Collected Poems, along with the poems from his most recent collections--Entries, Given, and Leavings--to create an expanded collection, showcasing the work of a man heralded by The Baltimore Sun as "a sophisticated, philosophical poet in the line descending from Emerson and Thoreau . . . a major poet of our time."

Wendell Berry is the author of over forty works of poetry, fiction, and non-fiction, and has been awarded numerous literary prizes, including the T.S. Eliot Prize, a National Institute of Arts and Letters award for writing, the American Academy of Arts and Letters Jean Stein Award, and a Guggenheim Foundation Fellowship. While he began publishing work in the 1960s, Booklist has written that "Berry has become ever more prophetic," clearly standing up to the test of time.

Wendell Berry is the author of more than fifty books of poetry, fiction, and essays. He was recently awarded the National Humanities Medal, the Cleanth Brooks Medal for Lifetime Achievement by the Fellowship of Southern Writers, and the Louis Bromfield Society Award. For more than forty years he has lived and farmed with his wife, Tanya, in Kentucky.

[Berry’s poems] shine with a gentle wisdom of a craftsman who has thought deeply about the paradoxical strangeness and wonder of life.”The Christian Science Monitor

Wendell Berry is one of those rare individuals who speaks to us always of responsibility, of the individual cultivation of an active and aware participation in the arts of life, be they those of composing a poem, preparing a hill for planting, raising a family, working for the good of oneself and one’s neighbors, loving.”The Bloomsbury Review

If you’re wondering where all the sincerity has gone in contemporary poetry, you may rest assured that Wendell Berry has it.”Bookpress

Disarming in its apparent simplicity and powerful in its lack of guile.”San Marcos Daily Record

For those who believe that life and the world are gifts, this is an invaluable book.”Booklist

[Berry’s] sage mind and poetic skills combine to skewer political arrogance, savage commercial folly, muse on growing old and lament a good dog’s death. Mindful of time and earth, of joy and love, Berry calls us to the hard work of a hope and peace and gratitude so incarnate that they rest on the ground underfoot.’”Christian Century