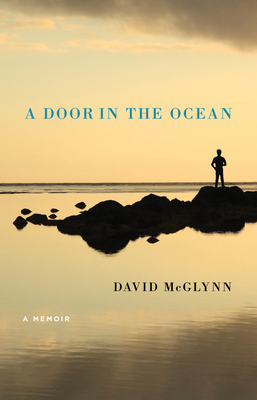 A Door in the Ocean

On a warm September night in 1991, in a quiet neighborhood north of Houston, Texas, David McGlynn’s closest friend and teammate on the high school swimming team is found murdered on his living room floor. As the crime goes unsolved and his friends turn to drugs and violence, McGlynn is vulnerable, rootless, searching for answers. He is drawn into the eccentric and often radical world of evangelical Christianitya journey that leads him to a proselytizing campus fellowship in Southern California, on a mission to Australia, and to Salt Lake City, where a second swimmingrelated tragedy leaves him doubting the authenticity of his beliefs.

In his postevangelical life, he finds himself exiled from his parents, plunged into financial chaos, and caught offguard by the prospect of fatherhood. A new job offers hope for a new beginning, until the possibility of losing his newborn son forces him to confront the nature of everything he believes.

The memoir’s concluding chapter, which appeared in The Best American Sports Writing 2009, celebrates the author’s love for swimming, the enduring metaphor for his faith and the setting for many of his life’s momentous occasions. Rough Water charts the violent origins of one young man’s faith and the struggle to find meaning in the midst of life’s painful uncertainties.

Praise For A Door in the Ocean: A Memoir…

Praise for A Door in the Ocean

"Many of the key scenes in David McGlynn's striking new memoir, A Door in the Ocean, take place at the beach or in swimming poolsOcean swimming, in particular, transports McGlynn to another realm, and he does a terrific job of dramatizing the allure of solitary swims in open waterMcGlynn's writing, particularly about his long stint in the ranks of Christian fundamentalists, is alive with an insider's knowledge of the power and comforts and, yes, sometimes delusions offered by collective radical belief. In a larger sense, this is a compelling coming-of-age story, one marked by random tragedy and biblical tracts, bad church coffee and chlorine.” Maureen Corrigan, NPR

"McGlynn is an astute observer of relationships, and proffers insightful commentary on the power of memory to simultaneously burden and enrich the present. Beyond that, the sheer ease of his prose and the honesty of his journey are enough to keep readers moved and moving."Publishers Weekly

The death of his friend is actually only the introduction of this big-hearted memoir, but it establishes two key elements that are crucial: McGlynn’s experience as a swimmer and an evangelical Christian. He writes eloquently about both, and offers keen insight into the worlds of each.What makes it a winner is its language and beauty.” The Dallas Morning News

David McGlynn wrestles with some of the same fierce angels that haunted his debut collection of short storiesBoth books bear the mark of a serious craftsman; their paragraphs hold the reader with lyric and narrative powerMcGlynn trades glorious and sorrowful mysteries for an adult and hard-won faith in God’s merciful habit of keeping us afloat, even when the worst that can happen happens, as in every life it does.” Thomas Lynch, Christian Century

"David McGlynn writes with the urgency of a true believer and the poignancy of a man who has struggled with belief. A Door in the Ocean is a gripping memoir of family, friendship, and the longing for connection that both faith and competition can bring." Peter Manseau, author of Vows

A Door in the Ocean is a stunningly heartfelt journey of one young man coming to terms with family and faith through loss, tragedy, and hardship.” James Brown, author of The Los Angeles Diaries and This River

From its first page, A Door in the Ocean carries you like a rip tide. You don’t read this memoir, you live it. McGlynn is a keen storyteller, and his coming of age tale takes age-old human experiencestraumatic violence, inexplicable evil, sex, and religionand remixes them into an intimate and compelling tale. Just remember to stop and breathe as you turn the pages.” Janna Malamud Smith

From swimming to surfing, from mystery to murder, from zealotry to simple faith, David McGlynn's memoir packs in a stunning array of vibrant experience as its author makes his way from adolescence to adulthood. The writing is clean and swift, and though I had intended to meander through A Door in the Ocean at my leisure, ultimately I found I could not. I had to swallow David McGlynn's powerhouse of a story whole." Linda Gray Sexton, author of Half in Love: Surviving the Legacy of Suicide and Searching for Mercy Street: My Journey Back to My Mother, Anne Sexton

David McGlynn’s spiritual testament offers an antidote to the dogmatic forms of religion, and to the dogmatic assaults on religion, that cause so much strife in our day. He traces his search for a sustaining belief through a history of losses and recoveries, estrangement and reconciliation, all eloquently told. Still young in years, he possesses an elder’s insight into the price of faith that’s rooted in fear, and the promise of faith that’s rooted in love. His honesty is disarming, his prose compelling.” Scott Russell Sanders, author of Earth Works and A Private History of Awe

A good memoir keeps you up all night; a fine one clarifies your vision; a great one breaks your heart and changes your life forever. This exquisite new book by David McGlynn does it all.” Paula Huston, author of The Holy Way and Simplifying Your Soul

In A Door In the Ocean, David McGlynn writes beautifully about struggling to reconcile his youthful desires with the demands of a faith that may be too strict for his searching, disquieted heart. Anyone who has ever experienced the same will be very grateful to McGlynn for his confessions, which are written with an interrogating honesty that can accommodate reverencewhich is an uncommon, and very welcome, sound.” Carlene Bauer, author of Not That Kind of Girl

"McGlynn's heartfelt memoiroriginally began as a series of essays; now strung together, the chapters trace the continuing evolution of the author's hard-won faith, his realization that it wasn't "a kind of insurance policy against misfortune." In the process, he finally recovers that once-hopeful, brave kid, now grown up and back on the swim team, having found his door in the ocean and come safely out the other side."Atlanta Journal Constitution

Praise for The End of the Straight and Narrow

When a young writer proves in a first collection that he is the real thing, when the stories are as riveting and haunting as David McGlynn’s are, the temptation is to ask how it is possible. McGlynn writes both elegantly and deeply about the trick of salvation and the strange consolation of suffering itself, about the sorrows of the faithful and the faith that’s required of the nonbeliever.” Jane Hamilton

In these generous, effulgent stories, David McGlynn stays so close to his characters we can feel their longing, their feverish hope to keep their secrets. This is a rich, challenging, accomplished book.” Ron Carlson

The End of the Straight and Narrow examines lives deeply entwined in matters of forgiveness and transgression, of eternity and this moment here right here. These are stories of desperate nostalgia and hardhearted hope, matters of life and death, and McGlynn is a writer whose work we need now. But what this conventional praise I have just handed out doesn’t even begin to measure is the fact of how important these stories are.” Bret Lott

Whether he imagines a child whose final wish is to kill, or enters the heart and mind of a young man who blames himself for his mother’s blindness, McGlynn moves with such patience and curiosity, such exquisite tenderness for his people, we feel his life and ours may hang in the balance.” Melanie Rae Thon

A good book gets under your skin. A great book moves you toward wisdom. The End of the Straight and Narrow is the wisest book I’ve read in a very long time. This is smart, soultesting American fiction.” Alyson Hagy

McGlynn’s profoundly compassionate stories are surefooted and often witty, grounded in a vision so rich and full it seems to bring extra color to the world. With these luminous stories, David McGlynn announces himself as a writer of consequence.” Erin McGraw

A collection as humbling as it is meek. I am impressed by his believers’ whom he refuses to trivialize, categorize, or marginalize. I haven’t the words to say what a wallop McGlynn laid upside my head.” Lee K. Abbott

Wonderfully controlled stories of the wellintentioned and the flawed, those precarious souls who attempt to live a moral life in an often immoral universe. McGlynn’s collection is not just entertaining and memorable, but necessary.” Lee Martin

An exceptionally haunting collection. There is agony in these stories, and there is forgiveness and redemption. Here are everyday characters coping with what life has handed them. McGlynn is an author to watch; this is a collection to savor.” ForeWord Magazine

McGlynn’s fiction reminded this reviewer of the work of Flannery O’Connor, James Joyce, and Bobbi Ann Masonwriters who use irony, metaphor, and understatement to describe the dilemmas of characters trapped in presumption and moral equivocation. The stories scintillate with sharp images and subtle nuances in character. An impressive first collection.” Choice

McGlynn delivers stories like dark voyages in which the scripted lifegoverned by morality and responsibility and inherited roleshas failed or been exploded or perhaps transcended (possibly all of the above), exploring the difficult, extraordinary ways people respond to crisis and tragedy.” Quarterly West

McGlynn is an elegant craftsman of language. His writing is generous, honest, and polished. He has both the heart and the skill to offer something entirely new to American literature.” Image

This collection deals with the human struggle of staying true to one’s faith. It asks big questions about life and touches on human themes to which all can relate. None of this is for the faint of heart.” Southern Living

The End of the Straight and Narrow announces the arrival of a visionary voice in contemporary fiction. It will be a pleasure to track the arc of David McGlynn’s journey.” San Antonio ExpressNews

Finely calibrated stories distinguished from most other recent American collections of short fiction by its focus on believers. McGlynn’s fiction plunges a reader into depths where questions about human agency and responsibility lurk. No good end comes to the straight and narrow of whom he takes meticulous measure. The collection offers readers the refined pleasure of gauging and engaging guilt.” Texas Observer

McGlynn’s tightly written, wellconstructed collection is about religion, but more. It’s about how what we believe affects our lives in the real world. The stories are often enigmatic, inviting analysis.” Baton Rouge Advocate

McGlynn’s stories focus on the lives and difficulties of people who happen to be Christian. Neither proselytizing nor an exercise in faithbashing, these stories, in a fresh way, [give] a truetolife look at how people really are, flaws and all. [In these stories] believing people are believable. My brain, as well as my soul, enjoyed the ride.” carp(e) libris reviews

David McGlynn grew up in Houston, Texas, and Southern California. His story collection, "The End of the Straight and Narrow," won the 2008 Utah Book Award and was named an "Outstanding Achievement" by the Wisconsin Librarians' Association. His stories and essays have appeared in "Men's Health," "The Huffington Post," "Best American Sports Writing," and numerous literary journals. He teaches at Lawrence University in Appleton, Wisconsin, where he lives with his wife and sons.

A lifelong swimmer, he captured a national championship in the 500-yard freestyle at the 2001 United States Masters National Championships. He continues to compete in open-water swimming races all across the country, and on most mornings is the first one in the pool.
Loading...
or
Not Currently Available for Direct Purchase