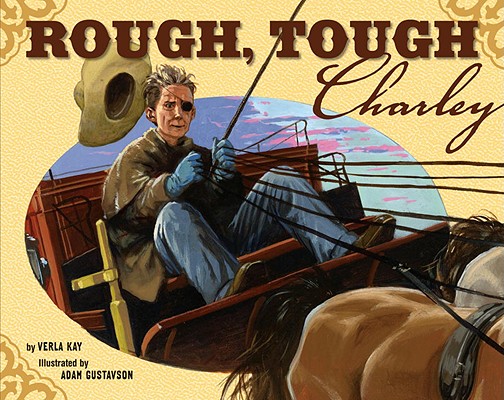 Charley Parkhurst always was more comfortable around horses than around humans. One of the most respected stagecoach drivers in the old West, Charley also kept one of the biggest secrets anyone could keep.

Author Verla Kay writes historical picturebooks in a special kind of poetry she calls "cryptic rhyme."This is her eighth book for children, two of which have been named Notable Social Studies Trade Books for Young People by the Children's Book Council, and many of which have received starred reviews from "Publishers Weekly, Kirkus Reviews, School Library Journal," and others. She and her husband, Terry, live in a little farming town in eastern Washington.

Adam Gustavson spent a whole lot of time doing research for this book, visiting horse farms and snuggling in with a stack of Old West books he's had since second grade. He is a professional illustrator living in New Jersey with his wife, two sons, and an acute horse allergy. This is his eleventh book for children.

"Kay's strict meter keeps Charley's inner thoughts at a distance from the readers, so that Charley effectively holds onto her secret until the book's end....Gustavson's lush, realistic oil illustrations are a lavish counterpoint (and) are suffused with the romance and roughness of a bygone era."

"The illustrations make excellent use of perspective to involve readers in the story and create a fitting counterpoint to the spare narrative." - School Library Journal