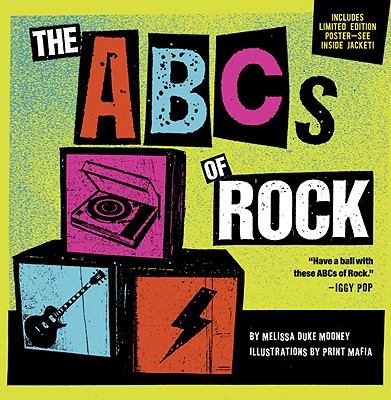 The ABCs of Rock (Hardcover)

From one of the top rock band poster artists in the country comes a collection of evocative images of 26 of rock music's most recognized icons. Starting with AC/DC's familiar lightning bolts and ending with ZZ Top's custom Ford coupe, this alphabetical retrospective of more than four decades of rock history will inspire music lovers of all ages.

A native of Louisiana, MELISSA DUKE MOONEY worked as a publicist in the film industry for 14 years before settling in Nashville. She drew inspiration for The ABCs of Rock from her love of singing at the top of her lungs to her favorite rock songs, and the rush of performing live in front of screaming fans while fronting the bands Junebug and Delores Duke. While working on the book she worked for Junket Productions, helping produce press events for film studios.

PRINT MAFIA is the team of Connie Collingsworth and Jim Madison, who have been making rock posters for bands including The White Stripes, the Eagles, Tool, and The Shins, since 1997. To create their unique designs, they hand-pull each color in their silkscreens and use X-acto knives, copy machines, and a variety of other materials, to give their finished product a gritty, irreverent, and at times retro feel. Connie and Jim work out of offices in Bowling Green, Kentucky.

Praise For The ABCs of Rock…