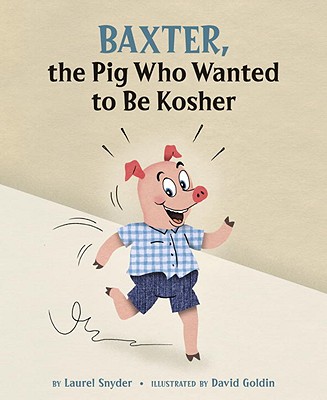 Baxter, the Pig Who Wanted to Be Kosher

While waiting for the bus, a man tells Baxter the pig about the joys of Shabbat dinner. But before Baxter can find out how he, too, can join in the fun, the man has boarded the bus. Soon after, Baxter learns that he certainly cannot be a part of Shabbat dinner because he's not Kosher. So begins one pig's misguided quest to become Kosher. Will Baxter succeed or will his dreams of taking part in Shabbat dinner remain unfulfilled? Readers will cheer as a series of misunderstandings leads to a warm message of welcome and community.

Praise For Baxter, the Pig Who Wanted to Be Kosher…

Starred Review, Publishers Weekly, June 28, 2010:
"Snyder and Goldin go together like matzo balls and chicken soup: the bright, daffy prose and ebulliently goofy cartoon and photo collages will persuade readers that they don't have to be Jewish to enjoy Baxter's spiritual journey—which ends, happily enough, at the Shabbat table of a kindly rabbi. Yes, of course he's a guest. What did you think?"

Review, The Horn Book Magazine, September & October, 2010:
"In-the-know readers will be tickled pink by mensch Baxter...while the uninitiated will quickly catch on."

Review, Kirkus Reviews, July 15, 2010:
"This will...find plenty of use in Jewish homes, particularly among families in which one parent is not Jewish."

LAUREL SNYDER is the author of Any Which Wall, Up and Down the Scratchy Mountains, and Inside the Slidy Diner. In addition to her books for children, Laurel has written two books of poems and edited an anthology of nonfiction called Half/Life: Jew-ish tales from Interfaith Homes. She is a graduate of the Iowa Writers' Workshop and an occasional commentator for NPR's All Things Considered. Laurel lives in Decatur, Georgia.