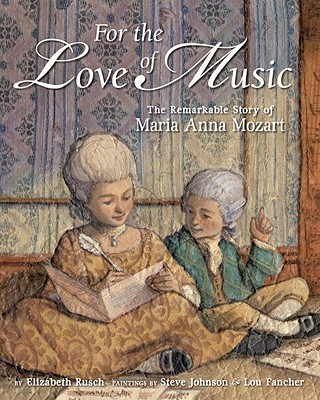 For the Love of Music

By the time she was 12, she was considered one of the finest pianists in Europe, but today few people know her name. Maria Mozart, like her famous brother Wolfgang, was a musical prodigy. The talented siblings toured Europe, playing before kings and empresses, were showered with gifts and favors, and lived in a whirlwind life of music and travel. They were best friends, collaborators, and confidantes. As they grew older, Wolfgang was encouraged to pursue his musical ambitions, while Maria was told she must stop performing and, ultimately, marry. But she was determined to continue playing the piano every day, for the love of music . . . .

Praise For For the Love of Music: The Remarkable Story of Maria Anna Mozart…

Review, Kirkus Reviews, January 1, 2011:
"This is an extraordinarily constructed work: Rusch … illuminates in simple but vivid terms how important music was to Maria … Johnson and Fancher echo the elegant construction of the text … so every image is full of texture and heft."

Review, Portland Oregonian, March 13, 2011:
"This beautiful book is marketed for children ages 5-8; however, it is a masterpiece, resonating with all lovers of music, regardless of age."

ELIZABETH RUSCH is an award-winning freelance writer and former managing editor of Teacher magazine. Her first children's book, Generation Fix, was a Smithsonian Notable Children's Book and a finalist for the IRA's Children's Book Award. Will It Blow? was named a Natural History Best Book and a Washington Reads Pick.

Husband and wife team, STEVE JOHNSON and LOU FANCHER have collaborated on more than 30 picture books. I Walk At Night was a New York Times Best Illustrated Book.
or
Not Currently Available for Direct Purchase