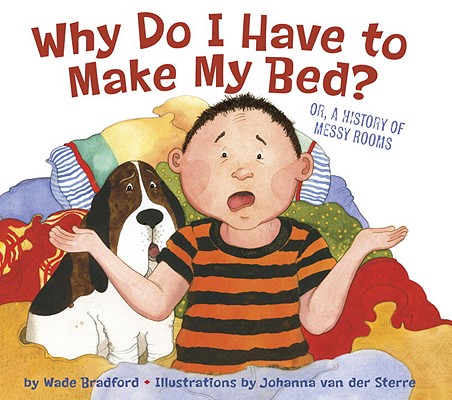 Why Do I Have to Make My Bed?

Since ancient times, one question has endured in the hearts and minds of children: Why do I have to make my bed if it's just going to get messed up again? Now, Wade Bradford takes readers on a trip through time for a humorous look at how bed-making has evolved throughout history.  Using examples of household tasks that might have been performed in colonial America, in ancient Egypt, by Vikings, and so on, this clever examination of chore lore eventually reveals the answer to this age-old question. (Hint: Mothers throughout history have always had a ready response.) This book makes history so much fun, kids won't even realize they're learning.

Praise For Why Do I Have to Make My Bed?…

Starred Review, Publishers Weekly, December 14, 2010:
"With its clever premise, keenly observed visual comedy, and easygoing pedagogy (an excellent afterword draws more directly on scholarship), this book deserves a place on the shelves next to the Magic School Bus series."

Review, Booklist, January 1, 2011:
"This lively picture book offers a great way to talk to kids about history: not the statesmen and generals but the lives of ordinary people at home."

WADE BRADFORD is a  teacher, playwright, and screenwriter with almost 20 published children's plays to his credit. Wade has written for About.com Guides and done web-design and multimedia work. This is his first book.

JOHANNA VAN DER STERRE graduated with an MFA in Illustration from the Savannah College of Art and Design. She is the illustrator of Mendel's Accordion, which was named a 2008 Notable Book by the Association of Jewish Libraries. Johanna has worked with educational and magazine publishers in the past and makes her trade book debut with Tricycle Press.
Loading...
or
Not Currently Available for Direct Purchase